In the 15th stage of the Tour de France, we saw last year’s winner, Egan Bernal, drop from third in the GC to 13th overall, 8 minutes and 25 seconds behind Primoz Roglic. All of this happened on the latest ascent of the day, Grand Colombier, as Wout Van Aert speeded up switches with Bernal.

This leaves us with a question: How was Bernal’s last 20 minutes as a competitor in the GC of the Tour de France?

Bernal has clearly been on a day off, and that becomes all the more evident when we look at strength.

Bernal and Ineos do not release Race Day energy profiles. But we do have Harold Tejada’s Strava file. Tejada rode for the Astana Pro Team, and was in the leading group on the recent ascent of Stage 15, but was later walked away. However, he created it with the leaders for much longer than Bernal did. So we can use his profile to define the race requirements for the final climb.

The power of playing by playing

Race to Selle de Fromentel base

As the road disintegrated, the group was content letting Jumbo-Visma set speed. Looking at the strength graph for this segment indicates that while Tejada was climbing at the lower end of this threshold, there were no spikes so it was just ‘tapped’.

Regardless, the pace was too great for many of his teammates, leaving him with only lieutenants (foreshadowing). This is in contrast to Primus, who still had five teammates by the time they reached the top. Here are Tejada’s stats for this climb.

A short nine-minute descent separated between the Fromentel summit and the Col de la Biche. Once again, the Jumbo-Visma pace was steady. There are no noticeable rises in the Tejada strength chart here. One more thing to note: The portion above includes a portion of the slope just before the summit, giving riders a break, so this can be said to have definitely been the easiest climb of the day.

Here are Tejada’s stats for this climb.

Here I will focus on the Colombian first part, “Lacets,” in which Bernal was shot down by Wout Van Aert.

The GC group reached the base of the ascent 1 minute 45 seconds behind the remaining two riders from today’s breakup. Robert Gysink was annoyed at the front shortly after arriving at base, leaving Van Airt to do the work. Here Bernal, positioned in the middle of the box with the shirt open, splashing water on his head, looked uncomfortable.

With about 8 miles (12.8 km) still going and with the GC group about 17 seconds behind the last man standing from today’s breakup, the bottom has fallen for Bernal. By watching it live, you can see Bernal take off all of a sudden. At first it looked like a mechanical one, but soon it turned out that he was in trouble.

Using Tejada’s stats, we can see what kind of voltage was set before this happened:

While these numbers are out of this world just for people like you and me, they are not Bernal’s. so what happened? Unfortunately, there is no single correct answer here. But we can offer some insights and allow you to draw your own conclusions.

Was the pace too high?

Doubtful. Guillaume Martin is able to return to the main set after stopping completely at the base of the climb. Plus, looking at my previous article, it looks like Bernal should have been able to stay with the front group with ease. 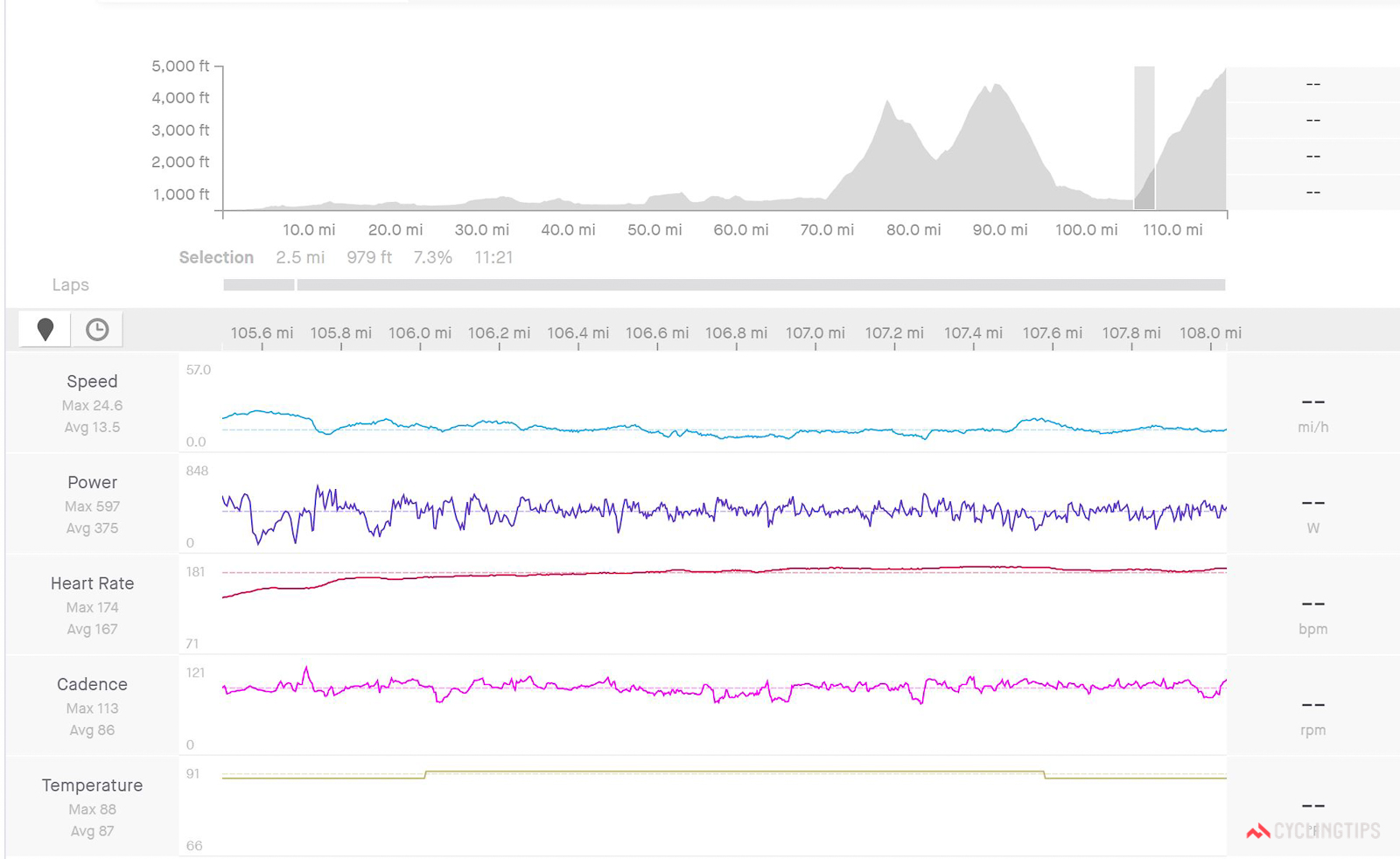 Did heat play a role?

Alling asked Tips Bojacar for his opinion of the speed to be set at this point and gave this insight: “Yes, I think Van Aert was going really well. But the pace was really high all day. So it wasn’t high peak powers but in general the day was tough. And hot. “

Heat cannot be excluded. The temperature in this part of the climb was 88 degrees Fahrenheit (31.1 degrees Celsius). When you exercise in the heat, your heart rate increases to help keep you cool. An increased heart rate will increase your stress rate. I can speak to this personally because the temperature in Boulder last week was 98 degrees Fahrenheit (36.7 degrees Celsius) and my heart was indicating that I was putting in great effort, but I was only doing the 2 watt zone.

What about the lack of colleagues?

Jumbo-Visma appears to have stolen a page from Ineos’ playbook. They gather their knights at the front of the group and set a pace that does not allow others to attack, but not so strong that they also blow themselves up. Ineos / Sky has done a lot of this in the past. But Bernal made the final ascent with only two teammates remaining, leading one of them to question whether David Brailsford made the right call in how the team split into races during the intense racing calendar.

There is no clear “ah ha” moment that I can point to and say, “That’s why Bernal was shot down.” It could be one of the reasons mentioned above, a combination of them, or none of them. Suffice it to say that Bernal simply “did not have it” on stage 15 of the tour.

Bobby Epstein wants more races in the US

There is still a lot for Blenderbot 3 (Meta) to learn

Bad news for sweet teeth: Less candy due to dehydration