As business picks up, Oakland International has reopened some closed gates.

As business picks up, Oakland International has reopened some closed gates.

We’ve been reporting on the resumption of various routes from San Francisco International in recent weeks, but Oakland International is having a revival of its own. Although the Big Three U.S. carriers have basically pulled out of OAK, other airlines will be growing their schedules there in the weeks ahead, the airport said. Total seat capacity out of Oakland was 290,774 in June, but it will grow to 418,600 in July. That will include more flights from Southwest, Spirit, Alaska and Mexico’s discounter, Volaris. “The expanded service scheduled to be introduced in July and August has resulted in today’s (July 1) reopening of Gates 29-32 in Terminal 2, which had been closed since May,” the airport reported.

Southwest’s OAK schedule is due to increase from 75 flights a day in July to more than 90 in August – 75 percent of what it flew in August 2019. And some of that will be a resumption of Southwest’s Hawaii service. The airport said Southwest is expected to resume its “full schedule” of Hawaii flights in July, supplementing its twice-daily Honolulu service with two flights a day from Oakland to Kahului, Maui, and the return of service to Lihue, Kauai and to Kona on the Big Island. Southwest is gearing up for the August 1 removal of Hawaii’s mandatory 14-day quarantine for all visitors, as long as they get a negative test result for Covid-19 before they leave home. (Since the new testing protocols were announced, the cheapest Hawaii fares have increased from $197 rountrip to around $280 roundtrip.)

Hawaiian Airlines is also making a comeback, with plans to resume a “reduced schedule” from its mainland gateways on August 1. In addition to a resumption of Honolulu-Portland service this week, Hawaiian said previously it will bring back daily Honolulu flights from San Diego and Sacramento on July 15. And this week it said its August 1 plans include the reinstatement of service from HNL to San Jose, Oakland, Phoenix, Las Vegas, New York and Boston. Hawaiian will also use A321neo aircraft to revive flights to Maui from San Francisco, Oakland, San Jose, Sacramento and Los Angeles; to Kauai from LAX and San Jose; and to Kona from LAX. You can click here to see the frequencies and startup dates.

Chicago appears to be the first major city to impose a quarantine on visitors. AP reports: People traveling to Chicago from 15 states with increasing numbers of confirmed cases of the coronavirus will have to quarantine for two weeks upon arrival or face possible fines, city officials announced Thursday. To comply with the order that takes effect Monday, travelers must stay at a single home or other dwelling for 14 days except to seek medical care or be tested for COVID-19. As of Thursday, that means people coming from Alabama, Arkansas, Arizona, California, Florida, Georgia, Idaho, Louisiana, Mississippi, North Carolina, Nevada, South Carolina, Tennessee, Texas, and Utah will be affected.

Bay Area residents planning to visit the metro New York area – in fact, anywhere in New York State, New Jersey and Connecticut – might be dismayed to learn that California this week was added to the list of states whose residents must undergo a 14-day self-quarantine when they arrive there, based on California’s recent coronavirus flare-up. According to New York Governor Andrew Cuomo’s executive order on the matter, non-compliance could result in a civil penalty of up to $10,000. You might be wondering how New York and its neighbors could enforce the quarantine rule, and that’s a good question. As Cuomo explained it during a CNN interview, “We know what flight you came in on. And we’ll have inspectors who are randomly looking at the names on the list and calling to follow up to make sure you’re quarantining.” But he added: “I think most people are going to honor it.”

According to Routesonline.com, some Bay Area routes that Alaska Airlines had previously planned to offer this summer are now slated to begin on September 1 instead. That includes two daily E175 Horizon Air flights from San Francisco International to Boise and one a day from San Jose to Spokane, along with seven days of 737 service between SFO and Anchorage. Also due to start September 1 is new Alaska Airlines service between Los Angeles and Fresno (two daily E175s), a daily Portland-Denver 737 flight, a daily Portland-San Luis Obispo E175 flight, and a daily E175 roundtrip to Boise from Paine Field in Everett, Wash. However, Alaska’s Seattle-Cincinnati route, previously set to begin August 18, has been pushed back to May of next year.

Earlier this week, we reported on United’s plans to bring back more domestic and international service during August. Now American Airlines has announced plans for the future of its international network into next year, and it’s far from a V-shaped recovery. AA said it is planning a long-term “reset” of that network that will mean a 25 percent reduction of its long-haul international capacity in the summer of 2021 compared to 2019 levels.

Los Angeles International will take a big hit in American’s revised long-haul schedule, losing service to Hong Kong, Buenos Aires, Sao Paulo, Beijing, and Shanghai (assuming AA gets government approval for its planned start of Seattle-Shanghai flights as part of its new partnership with Alaska Airlines). The airline noted that it expects to resume LAX-London Heathrow flights this winter and LAX-Sydney service in summer 2021, and to launch LAX-Auckland flights in the winter of 2021. From the west coast, AA will depend on its Alaska partnership for future growth (Alaska is expected to become a full Oneworld member in 2021). In addition to moving its LAX-Shanghai route to Seattle, American previously announced plans to begin new transpacific service from SEA to London and Bangalore in 2021. 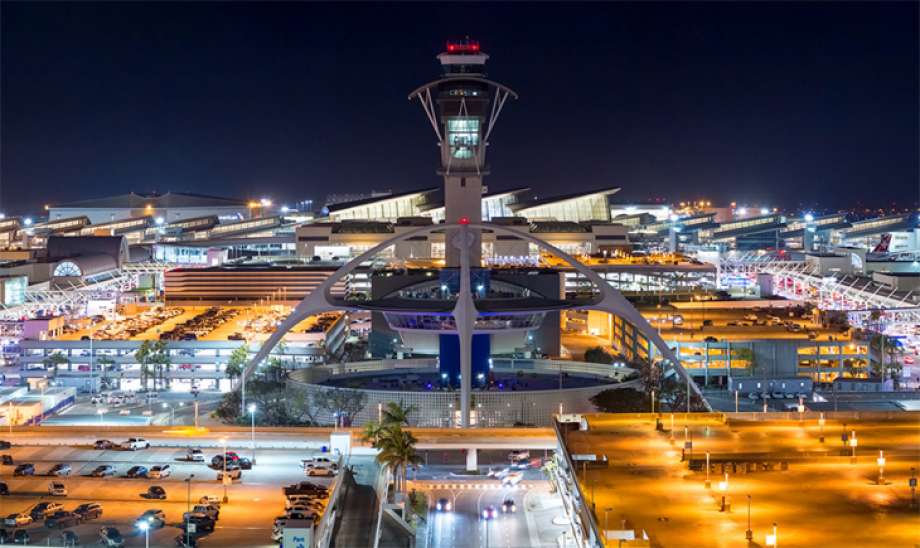 American Airlines’ “reset” of its international network will mean the end of several Los Angeles routes.

American Airlines’ “reset” of its international network will mean…

American’s plans also include the elimination of some international routes from its other hubs, including Charlotte, Dallas/Ft. Worth, Miami, Chicago O’Hare and Philadelphia. A spokesperson noted that American will “continue to fly to joint business partners’ hubs. And while some international markets will not return, American anticipates a full schedule to LHR by 2021. The airline will continue to work closely with British Airways to provide an extensive network that allows customers to reach key destinations when they are ready.” Click here to see all the details of American’s announcement and international schedule changes.

Delta said this week it has resumed complementary alcoholic beverage service (beer and wine) for passengers in first class and Comfort+ on all flights of more than 500 miles. Delta also plans to reopen more of its Sky Club airport lounges this month, including the one in San Francisco International along with those in Chicago O’Hare, Denver, Miami, Nashville, Orlando and Phoenix. (Some Sky Club locations never closed, including Atlanta, Boston, Detroit, LaGuardia, LAX, Minneapolis-St. Paul, JFK, Seattle, Salt Lake City and Washington Reagan National.) Delta flyers should also note that they now check in a SFO’s Terminal 2 while the Terminal 1 check in area gets a re-do.

JSX, the regional carrier formerly calling itself JetSuiteX, plans to add four routes in the western U.S., all operating four flights a week, according to Routesonline.com. They include Monterey-Orange County starting this week, along with Burbank-Monterey, Orange County-Phoenix and Las Vegas-Seattle Boeing Field, all due to start July 23. The airline will use its trademark ERJ-135s on all the routes.

Don’t miss a shred of important travel news! Sign up for our FREE weekly email alerts.

Frontier Airlines is adding service to a number of Florida airports this month, mostly with flights one or two times a week, originating from Los Angeles, Newark, Philadelphia, Long Island MacArthur, Cleveland, Cincinnati, Dallas/Ft. Worth, Chicago O’Hare and Boston. You can see the full schedule here.

Last week, we reported that Customs and Border Protection would resume conducting personal interviews on July 6 for travelers who apply to join its Global Entry trusted traveler program. CBP’s enrollment centers have been closed due to the coronavirus crisis. But this week, the agency said it will delay those reopenings until August 10 at the earliest due to the recent spikes in Covid-19 cases in several states. Anyone who recently made an interview appointment for July or early August will have to reschedule, the agency said.


In foreign airline news, the latest schedule filing from Lufthansa indicates it will bring back San Francisco-Frankfurt service September 2 with three weekly A340-300 flights and will boost its current SFO-Munich schedule from three A350 flights a week to five as of August 2. (Lufthansa this week revived LAX-Frankfurt service with three 747-8 flights a week and will boost that schedule to five days a week in August and seven in September.) Lufthansa’s Swiss International affiliate is planning to come back to SFO August 2, with three weekly 777-300ER flights to Zurich. British Airways’ latest update includes plans to increase San Francisco-London Heathrow and LAX-LHR from one flight a day to two as of August 1. And Air Canada said this week it is suspending service “indefinitely” on 30 domestic routes due to a lack of passenger demand. Click here to see the full list.

Delta’s South American partner LATAM filed for Chapter 11 bankruptcy in May, and now Delta’s other big Latin American partner – Aeromexico – has done the same. The Mexican carrier said this week that it will continue to serve customers while it undergoes a financial restructuring, and that all of its tickets, reservations, vouchers and award points will remain valid. “In July the Company expects to double the number of its domestic flights and quadruple the number of international flights as compared to June,” Aeromexico said.

Israel’s El Al was supposed to resume a few limited flights from Tel Aviv to Los Angeles and New York this month, but those plans have been spiked as the airline was hit with a new crisis this week. According to the Times of Israel, discussions between the airline’s pilots committee and management collapsed in a bitter dispute and El Al ordered all its aircraft to be grounded – and those that were abroad to return home. It’s not clear how or when the situation might be resolved; the airline is also in the midst of discussions with Israel’s government for a financial relief package. Israel currently requires visitors to undergo a 14-day quarantine upon arrival.

The U.S.-based private equity firm Bain Capital has emerged as the successful bidder for Virgin Australia, which has been operating only a limited domestic network since it entered voluntary administration – a form of bankruptcy – in April. The acquisition is subject to approval by the airline’s creditors in August. Virgin Australia’s previous owners – which included Sir Richard Branson’s Virgin Group, Singapore Airlines and Etihad Airways – will have their equity wiped out. Bain Capital will be expected to recapitalize the carrier and eventually revive its suspended service; there’s no word yet on how long that might take.

Chris McGinnis is SFGATE’s senior travel correspondent. You can reach him via email or follow him on Twitter or Facebook. Don’t miss a shred of important travel news by signing up for his FREE weekly email updates!

SFGATE participates in various affiliate marketing programs, which means we may get paid commissions on editorially chosen products purchased through our links to retailer sites.