A spectacular shot of a Martian avalanche, an image of a dust devil and a long-distance portrait of planet Earth are among a selection of photos shared by NASA to mark 15 years of the agencies Mars Reconnaissance Orbiter.

The images were all taken of the Red Planet and its surroundings from space using equipment onboard the orbiter – which is the oldest spacecraft currently active around Mars.

Since leaving Earth 15 years ago, NASA’s Mars Reconnaissance Orbiter has reshaped our understanding of the Red Planet including discovering information on dust storms, temperatures and subsurface minerals.

However, while the scientific discoveries have been remarkable, the orbiter has become best know for its stunning images showing remarkable features on the surface of the alien world.

HiRISE captured avalanches in action. As seasonal ice vaporised in the spring, these 1,640-foot-tall (500-meter-tall) cliffs at Mars’ north pole began to crumble 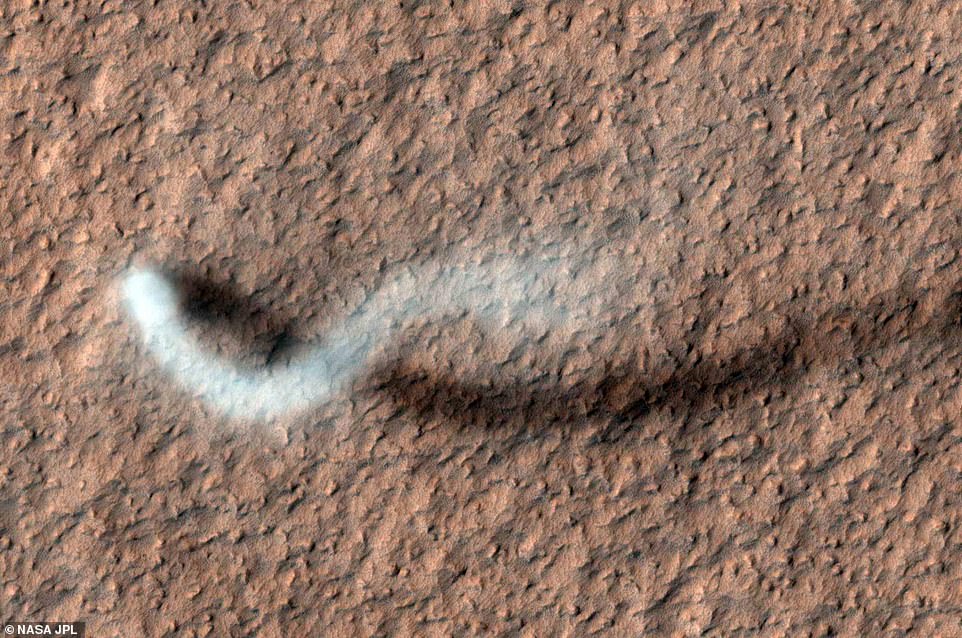 As HiRISE pans over large swaths of Mars’ surface, it occasionally discovers surprises like this towering dust devil, which was captured from 185 miles (297 kilometers) above the ground

Among its instruments, MRO carries three cameras: A fisheye lens, one for 19-mile-wide black and white terrain shots and the High-Resolution Imaging Science Experiment (HiRISE) which provides the most striking photos.

Able to zoom in on surface features at the highest resolution, the detailed, colour images from HiRISE have captured dramatic scenes of nature on the Red Planet that have captivated audiences back on Earth.

These scenes include tumbling avalanches, sky scraping dust devils, and other features of a changing landscape that show Mars is more than just a red rock.

The camera has also provided images of other NASA spacecraft at Mars, like the Curiosity and Opportunity rovers, the Martian moon Phobos and even a picture of Earth. 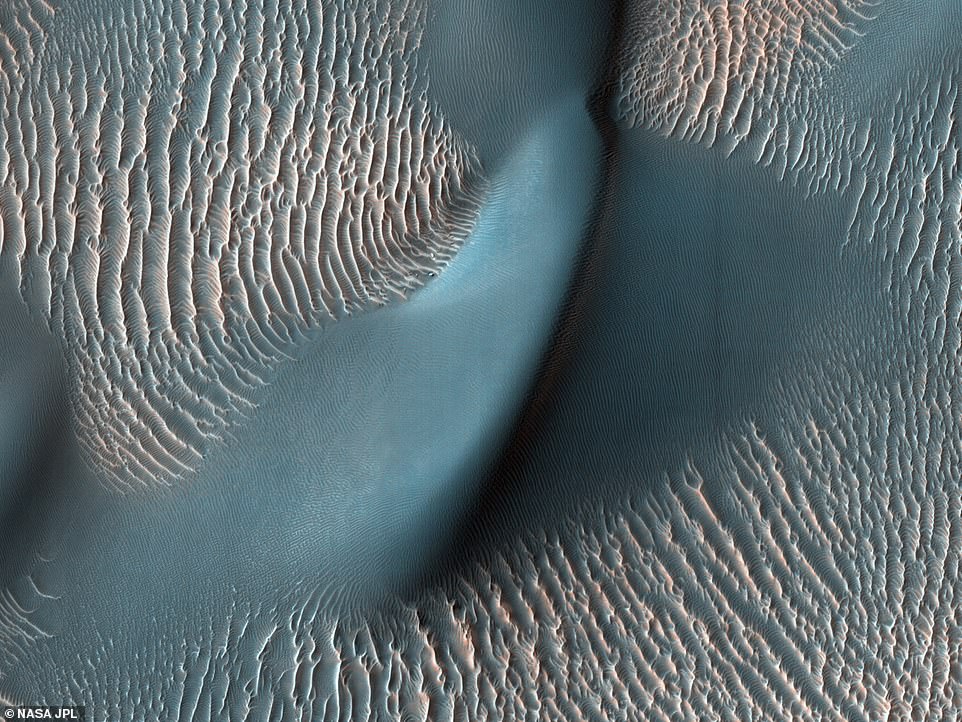 This ‘false colour’ image shows sand ripples from February 2009. The ‘false colour’ has been added to this image to accentuate certain details, like the tops of dunes and ripples. Many of these landforms are migrating, as they do on Earth 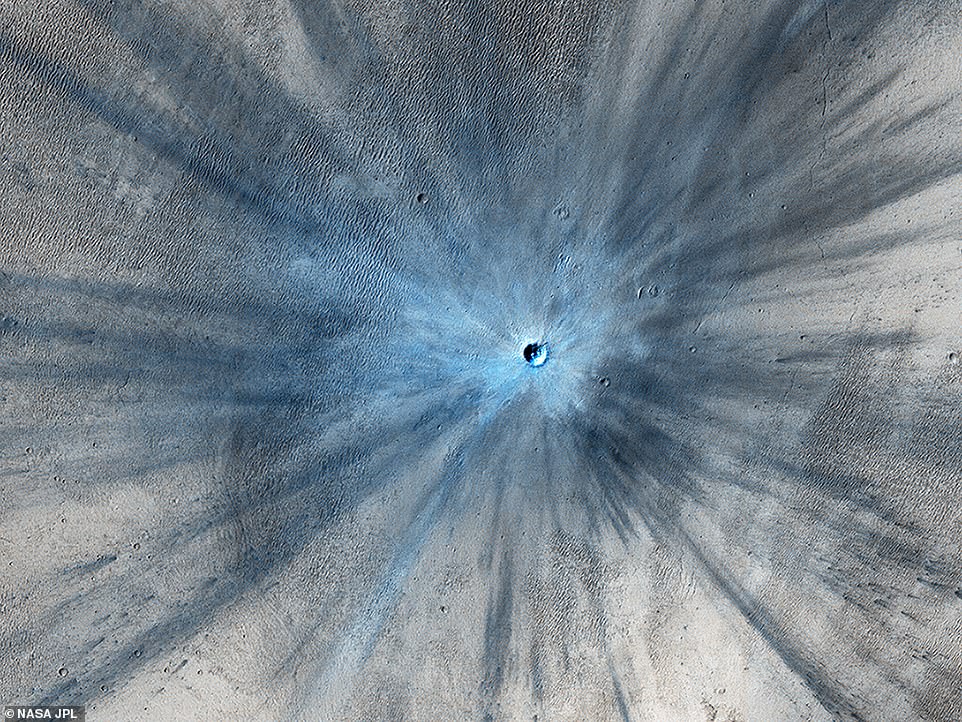 A dramatic, fresh impact crater dominates this image taken by HiRISE. The crater spans approximately 100 feet (30 meters) in diameter and is surrounded by a large, rayed blast zone

The Mars Reconnaissance Orbiter is managed by NASA’s Jet Propulsion Laboratory (JPL) in Southern California and the team that run the spacecraft selected a number of images they deem ‘among the most striking’ of the planet.

One of those images shared by the JPL team shows a red dusty avalanche plunging down a 1,640 foot tall cliff in May 2019 – caused by seasonal ice vaporising in the Spring.

Every Spring the Sun shines on the sides of the stack of layers at the North Pole of the Red Planet and the warmth destabilised the ice – with blocks of it and dust breaking loose.

As this happened the cliffs at Mars’ north pole began to crumble and this exposed the many layers of ice and dust that have settled along its face during the different Martian eras.

Like the rings of a tree, each layer has a story to tell scientists about how the environment was changing.

When the rocks reach the bottom of the cliff face, the blocks kick up a cloud of dust that appears as an avalanche in the photos shared by the NASA JPL team.

Dust was a major factor in a few of the images shared by the team as dust storms are routine on Mars.

Most are limited to small regions and are not as dramatic as what’s portrayed in movies but once or twice a decade a series of regional storms create ‘domino effect’ that result in the dust covering the whole planet.

The MRO captured one of these events in 2018 and it darkened the region above the Opportunity rover, depriving its solar panels of sunlight and ultimately leading to the end of the mission.

NASA rovers are featured in some of the other images shared from the MRO by the JPL team – they show the final traverse map of Opportunity and the tracks made by Curiosity in the Martian soil.

The pictures shared in the NASA photo essay show a changing and active landscape including seasonal dark marks on the Martian equatorial slope and ripples in sand dunes on the surface of the Red Planet.

Land changes over time, so having a spacecraft at Mars for more than 15 years offers a unique perspective, according to Leslie Tamppari, deputy project scientist at JPL, who said ‘the more we look, the more we discover’.

‘Before MRO, it wasn’t clear what on Mars really changed, if anything. We thought the atmosphere was so thin that there was almost no sand motion and most dune movement happened in the ancient past.’ 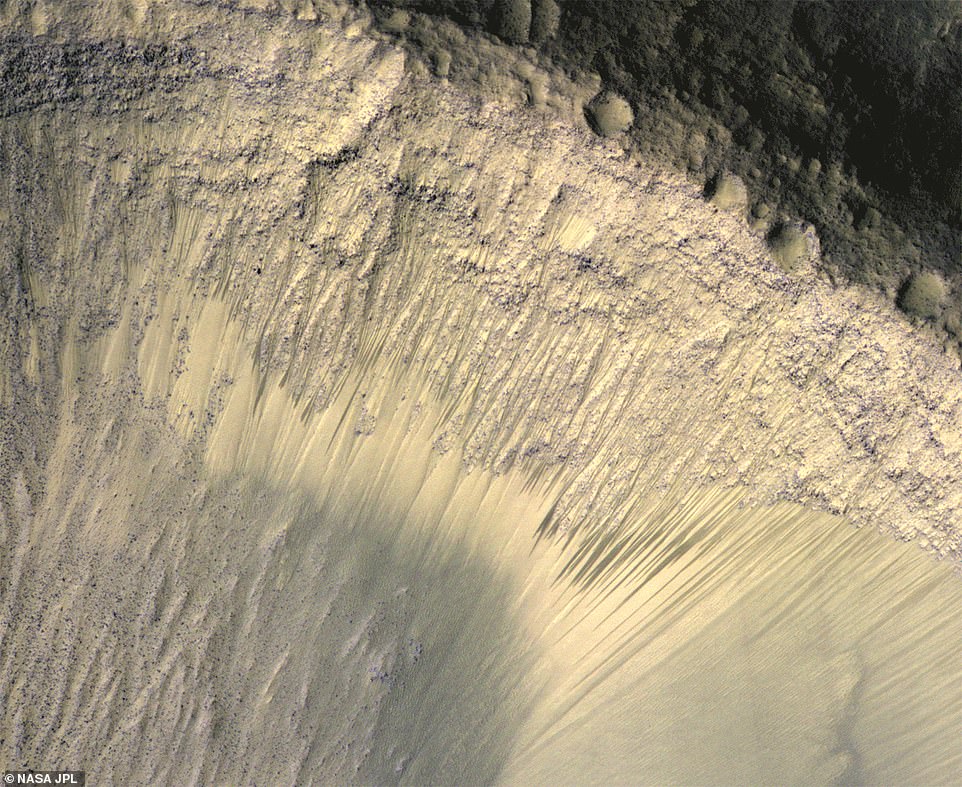 This composite image shows how  the appearance of dark markings on Martian slope changes with the seasons. These dark streaks appear in the same places at around the same times of year 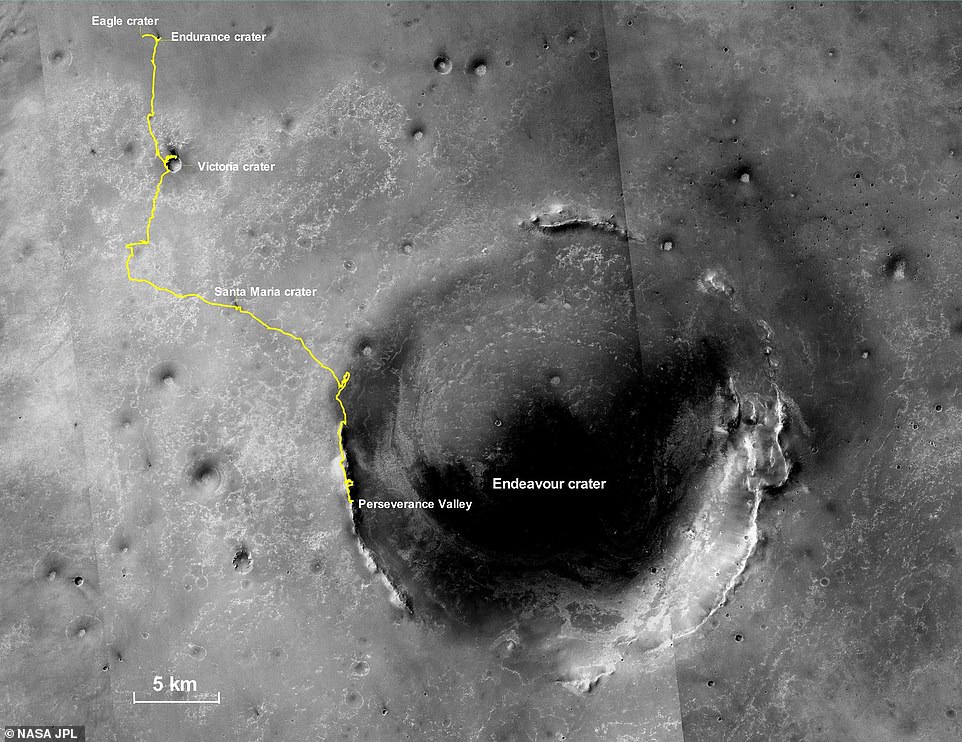 This is the final traverse map for Opportunity, showing where the rover was on June 10, 2018, the last date it made contact with its team before it was lost in a dust storm

Other images include a dramatic impact crater spanning 100ft  across from a large meteorite than wouldn’t have been able to penetrate Earth’s atmosphere.

Mars has a thin atmosphere – just 1 per cent as dense as Earth’s. As a result, there’s less of a protective barrier to burn up space debris. That means larger meteors make it through the Red Planet’s atmosphere than Earth’s.

NASA also shared an image showing dark marks on an equatorial Martian slope that appear in the same place and at around the same times every year.

It takes sharp eyes to find unique features on Mars, like recurring slope lineae. It was initially proposed they were caused by brine, since salt could allow water to remain liquid in the thin Martian atmosphere.

The consensus now, however, is that they’re actually caused by dark sand sliding down inclines.

The streaks were discovered by Lujendra Ojha, who was an undergraduate at the University of Arizona, which operates the HiRISE camera, and now is a professor at Rutgers University.

‘Sometimes you’re just looking at the right place at the right time,’ Ojha said. ‘I was completely baffled when I first spotted this, because I was just a student at the time – I wasn’t even in a planetary program.’ 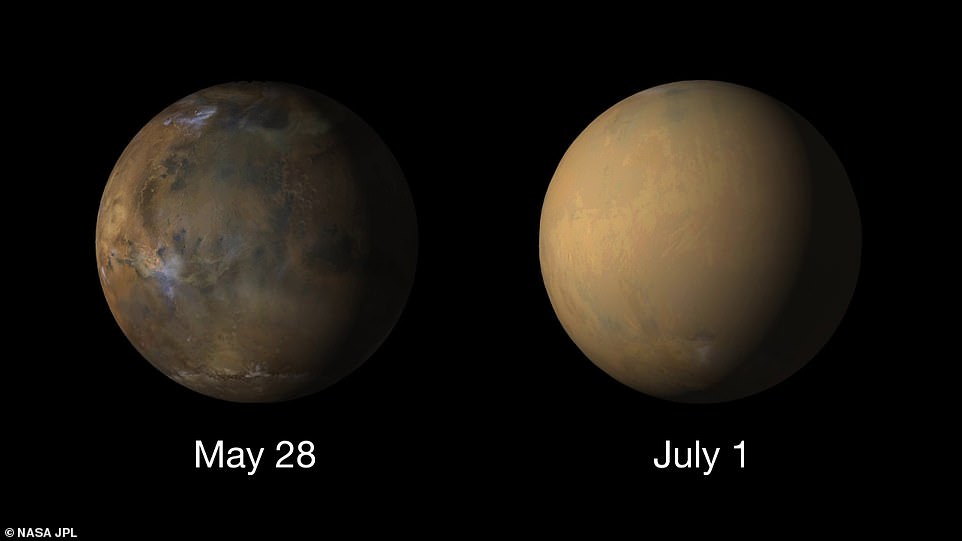 It wasn’t just the planet itself that MRO focused on, during its mission it turned its sights back to Earth to get a view of our world and captured a detailed image of the Martian moon Phobos.

Named for the Greek god of fear, Phobos is one of Mars’ two moons  – the other is called Deimos, named for the god of terror.

Phobos is only about 13 miles (21 kilometers) across but despite its small size, Phobos is of great interest to scientists as nobody is sure how it came to be within the orbit of Mars.

A Japanese mission is scheduled to launch to Phobos in the near future, and the moon has been proposed as a staging ground for astronauts before they go to Mars.

The Mars Reconnaissance Orbiter left Earth for the Red Planet on August 12, 2005 and cost $720 million – its purpose is the study the geology and climate of the planet and provide reconnaissance for future landing sites.

In 2021 the Mars 2020 Perseverance rover and the NASA Ingenuity helicopter will land in the Jezero Crater to search for signs of ancient Martian life.

The rover is equipped with a number of cameras and will be able to send back new pictures of the surface of the Red Planet to show one of our nearest stellar neighbours in greater detail than has been seen so far. 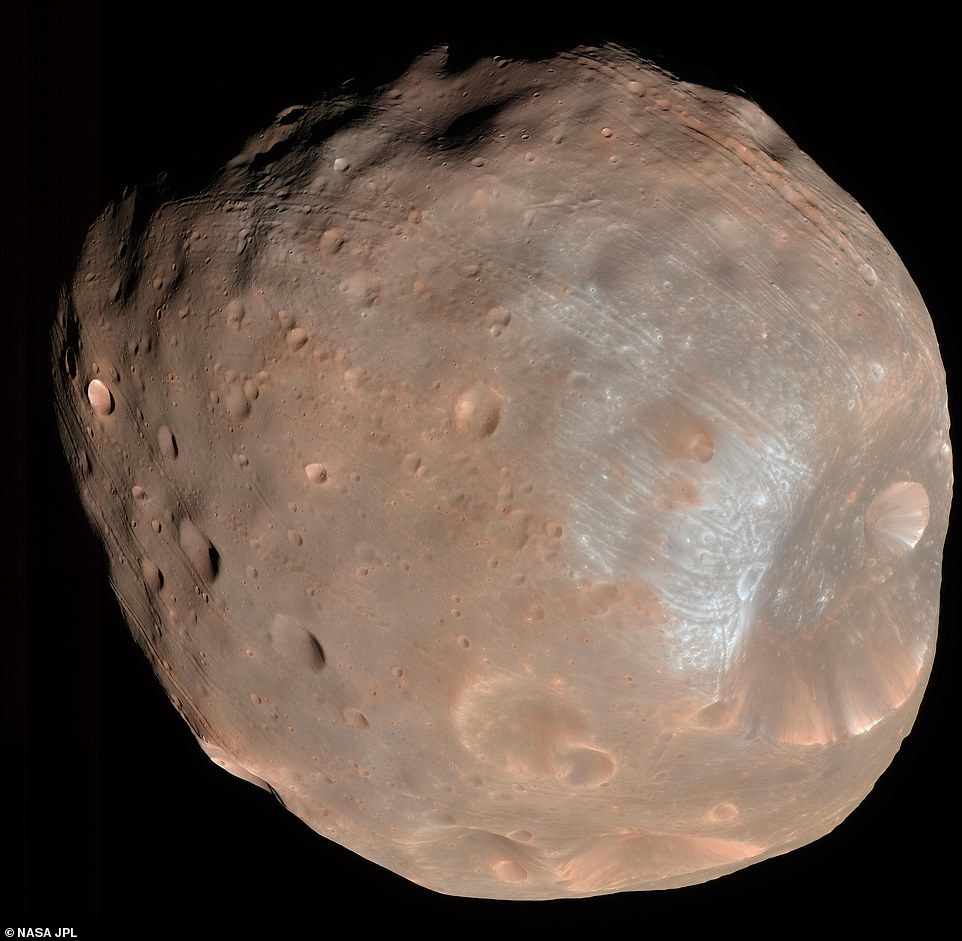 HiRISE took two images of the larger of Mars’ two moons, on March 23, 2008. Called Phobos, the moon is only 13 miles across

See also  "I like that it's tough. No team has a more tight schedule." 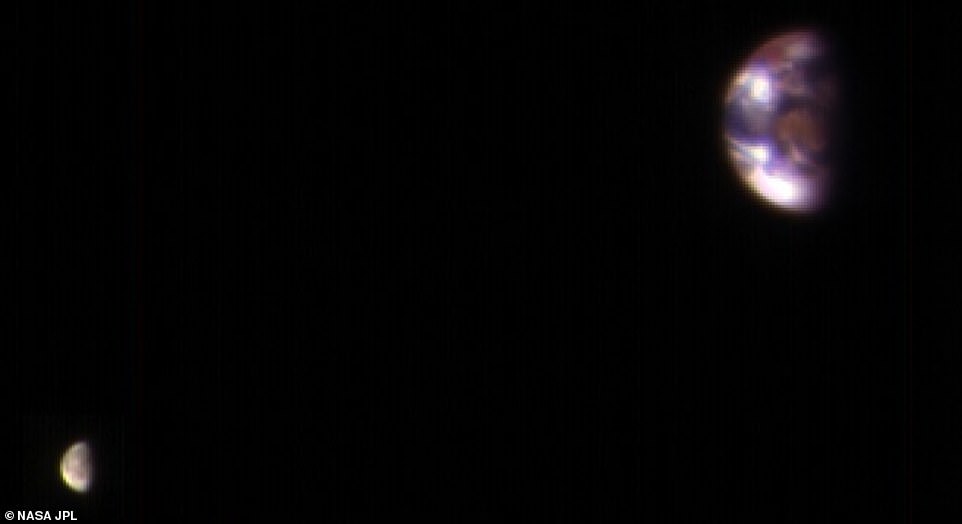 A composite image of Earth and the Moon. During its mission HiRISE has been turned towards the Earth to capture images of our home world and our natural satellite

The helicopter is a technology demonstration to test the first powered flight on Mars and is currently on board the Mars 2020 spacecraft attached to the belly of the Perseverance rover.

NASA recently marked a milestone in the development of Ingenuity – which will operate a number of test flights over 30 Martian days in the spring of next year.

The space agency recharged the batteries of the helicopter up to 35 per cent to make sure it was able to ‘speak’ to the device and test its instruments.

‘This was a big milestone, as it was our first opportunity to turn on Ingenuity and give its electronics a ‘test drive’ since we launched on July 30,’ said Tim Canham, the operations lead.

‘Since everything went by the book, we’ll perform the same activity about every two weeks to maintain an acceptable state of charge.’

Even after Perseverance has landed and Ingenuity has made its tests flights, the Mars Reconnaissance Orbiter will continue its mission to study the Martian atmosphere and share more sensational images of its surface.

NASA MARS 2020: THE MISSION WILL SEE THE PERSEVERANCE ROVER AND INGENUITY HELICOPTER SEARH FOR LIFE

NASA’s Mars 2020 mission will search for signs of ancient life on on the Red Planet in a bid to help scientists better understand how life evolved on Earth.

Named Perseverance, the main car-sized rover will explore an ancient river delta within the Jezero Crater, which was once filled with a 1,600ft deep lake.

It is believed that the region hosted microbial life some 3.5 to 3.9 billion years ago and the rover will examine soil samples to hunt for evidence of the life. 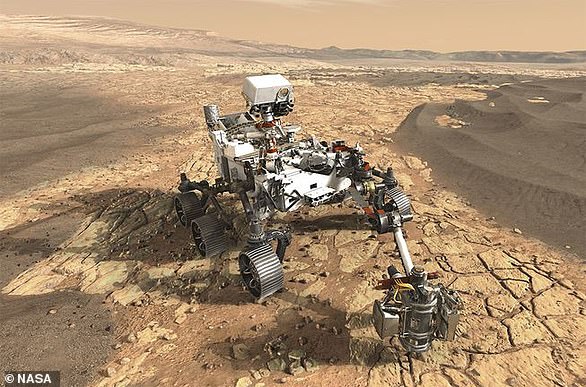 Perseverance is designed to land inside the crater and collect samples that will eventually be returned to Earth for further analysis.

A second mission will fly to the planet and return the samples, perhaps by the later 2020s in partnership with the European Space Agency. 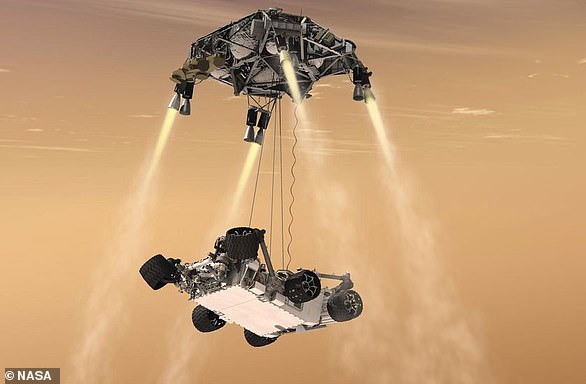