With the 88,000 reported hospital admissions blocked by vaccinations in one year, RIVM is once again in the clear with a data rabbit out of the top hat.

In collaboration with Egbert Hidding

On Monday, RIVM published a report that vaccination led to a decrease of 88,000 hospital admissions. This has been covered in almost all media. If you read the letter and carefully analyze the numbers, I wonder how an official body could possibly bring up something like this.

The letter states that the scientific publication will be published later this year. But the graph and interpretation show what was done to arrive at this figure of 88000. A number mentioned in the letter is still a conservative estimate.

First the chart published by RIVM:

But for the sake of understanding: since the effectiveness of vaccination is supposed to be higher, the purple bars will also be higher. Because then more people would have been taken away from the hospital. Over the entire study period, the total number of hospital admissions saved was 2.1 times higher than the number of true hospital admissions, according to RIVM.

If you take these ingredients together and apply a formula to them, the numbers will appear. But the question is whether the results of those formulas are realistic. Let’s say I’m working on something completely different. Based on a complex equation, my result is that there are currently 30 million people living in the Netherlands, then I know I made a mistake and I should check if I made an arithmetic error or if there is something wrong with my calculation. Equation.

Only if you look at this graph and put the hospital admission numbers from March 2020 in front of it, you’ll see something very strange. 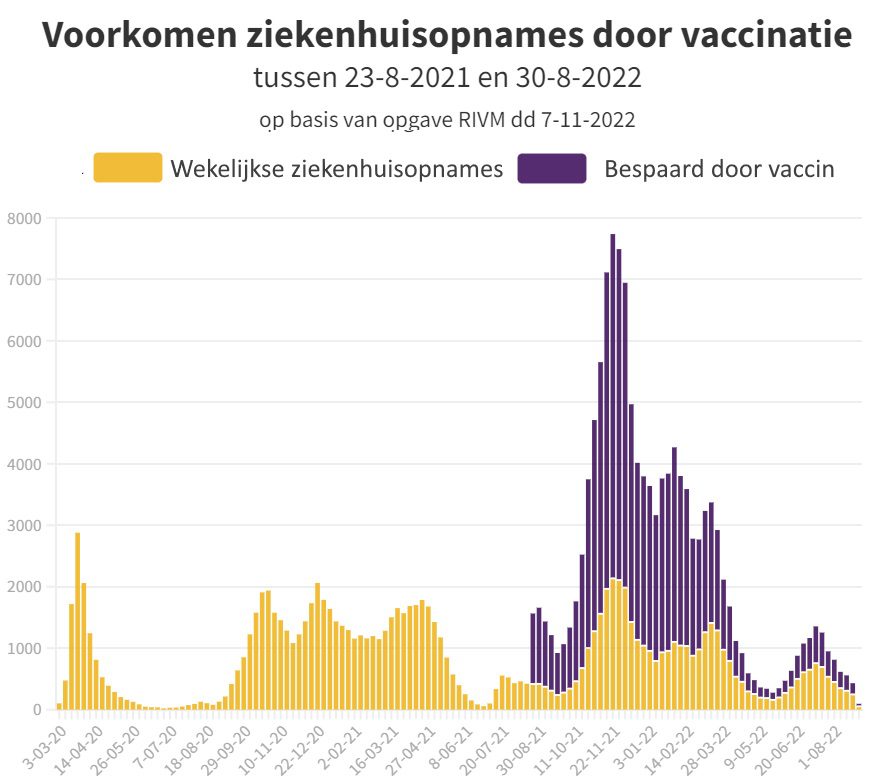 When comparing the chart from August 2021 to the previous period, three things stand out in particular:

For example, I will only focus on the comparison between November 2021 and March 2020. Hospitalization shows a difference of 2.7. This equation is indicative for the rest of the period:

In March we had a big outbreak. Nobody has antibodies yet. The highest number of hospitalizations in a week was 2,800. No one was vaccinated at that time.

It was the highest peak in the chart, including prevented hospital admissions, after 20 months, according to RIVM. Meanwhile, not only were 66,000 people hospitalized, but of course many more were infected. Let’s start from the numbers given by RIVM itself at the time about the relationship between infected people and hospitalizations. (1.25%). Then these 66,000 patients indicate that before the end of November 2021, about 5 million people were infected in the Netherlands (30%). Their risk of becoming infected again in November 2021 was much lower than those who did not become infected.

So this graph from the new RIVM letter shows that under fairly equal conditions (no one vaccinated) at the end of November 2021, Covid patients could have ended up 3.5 times in hospital compared to March 2020!

If RIVM gets to such unlikely numbers with their calculations, they’d be better off scratching their heads again and thinking about what I did wrong than starting to post it.

I will give a hint: in the formula, the effectiveness of the vaccine is – to a large extent – exaggerated.