A strange ‘road war’ erupts as van and BMW drivers try to collide with each other off the road on a residential street.

Written by Bhavicia Patel for Mailonline

Exhaust fumes rose into the air as two drivers tried to divert each other and engaged in a strange “road war” in Greater Manchester.

CCVT footage captured by a resident on Dunkinfield Street in Tameside shows a white Ford Transit and a gray BMW approaching each other on the narrow road and refusing to prioritize.

Then motorists inside the vehicles try to bump each other off the road as smoke from their tires and exhaust fumes rises into the air.

A white Ford Transit van and a gray BMW close together on the narrow road in Dunkinfield, Greater Manchester, and refuse to prioritize

During the bizarre clip filmed on September 3, drivers inside a BMW and white truck approached each other from opposite directions on the street.

The driver of the gray BMW exits his car and appears to exchange hot words with the van driver before returning behind the wheel.

Just seconds later, smoke from their tires and exhaust fumes blast into the air.

After nearly a minute of moving back and forth, the BMW driver then reversed his car and finally overtook the van.

The owner of the footage, who requested anonymity, explained that they were watching television inside their home when they heard “tire squeaking” and “bumping”.

They told the Manchester Evening News: “ I was watching TV with my son and we heard the tires and fenders squeaking and we saw smoke. 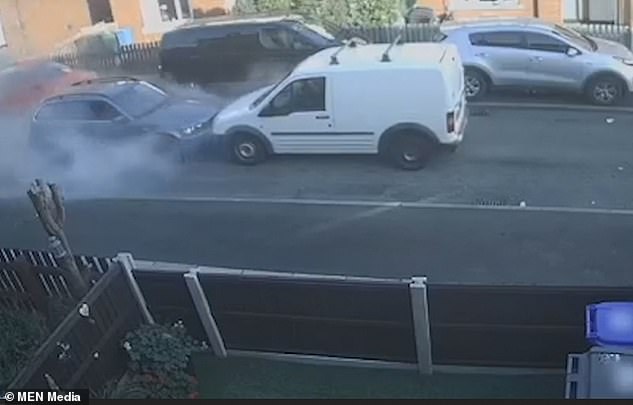 As the drivers continue to hit each other off the road, smoke from their tires and exhaust fumes are released into the air 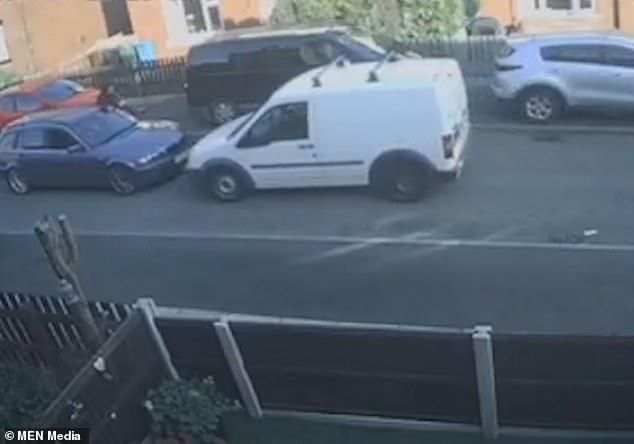 They went as fast as they arrived. It shocked us, but fortunately no damage to the other cars. There were tire marks on the road.

“I’ve never seen cars on the street before either, but they kind of get jogging.”

Greater Manchester Police told MailOnline that the incident has not been reported.