“The forest fire spread 170 km from the coast. The fire had been burning for 70 days. It was getting closer and closer to our house. There were days when we could do nothing but protect our house and its immediate surroundings from the fire. Eventually the fire stopped a kilometer away. One of our house. We were lucky.”

Australian Pol Pot (61) talks about the bushfires of the summer of 2019-2020, which are known in Australia as the ‘black summer’. He lives with his wife in the village of Mongarlo – 20 houses – in southeastern New South Wales. Butt works as a freelance construction worker and also spends a lot of time with the volunteer fire brigade as a leader.

Satellite image of the east coast of Australia with bushfires taken by the Copernicus Sentinel-2 satellite. In the yellow dot the village of Mongarlo where Pol Pot lives. 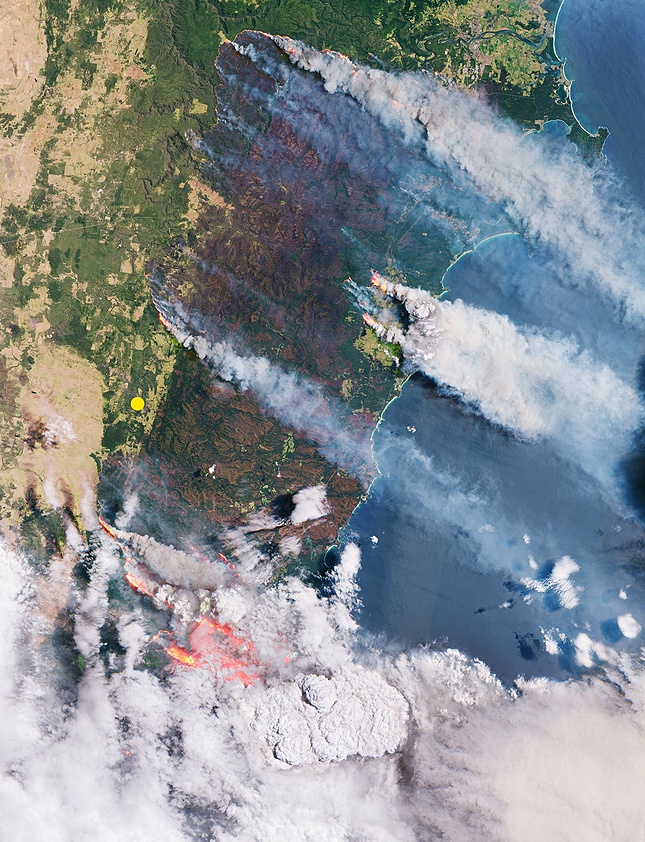 Butt says the 19-20 wildfires were terrifying, but he wasn’t unprepared. Because every summer, bushfires break out in southeastern Australia. The local volunteer fire brigade is made up of 20 members. We have two trucks and if needed we can also use a bulldozer.” Butt says they use fire to fight the flames: They burn huge tracts of forest, leaving a barren strip of land that the fire can’t get through. They don’t just do this work when the fires are burning.” We are preparing for wildfire season all year round.” Butt says climate change is exacerbating bushfires. “The summer before this bushfire was extremely hot and dry, making the forest vulnerable to fires.” A recent report from the United Nations Environment Program notes, the agency The United Nations Environment Agency, reports that the number of wildfires around the world is increasing exponentially, in part due to climate change.

For Bot, this is a reason to live as sustainably as possible. “We grow fruits and vegetables ourselves and live off the grid, using solar panels for electricity and solar boilers to heat water.” Bot has always lived eco-friendly. “It’s also something that gives meaning to our lives: We don’t want to leave the planet in poor shape for our children.”