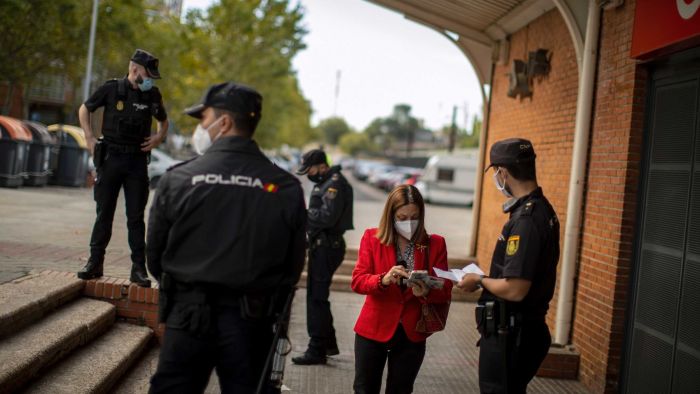 The move, which took effect immediately and lasted for two weeks, forced the Madrid authorities to reinstate travel restrictions that had been imposed by the national government but had been canceled the previous day by a court ruling in Madrid.

This successful legal challenge by Madrid officials was part of a long-running dispute between the country’s main political parties over their response to the coronavirus.

These differences, and the changing rules, often bothered and confused locals.

“We have no idea what to do or what not to do.”

The government declared a state of emergency after an emergency cabinet meeting following the court ruling.

For the latest news on the COVID-19 pandemic, read our live blog on Coronavirus.

Health Minister Salvador Illa said that the previous measures will return to effect and that only the legal framework changes.

He said it was “undeniable” that community transmission in the Madrid area, not just isolated outbreaks, was at a critical juncture as winter approached and respiratory problems increased.

The infection rate in the Madrid region for 14 days is 563 coronavirus cases per 100,000 inhabitants, more than double Spain’s national average of 256.

It’s five times the European average of 113 for the week ending September 27.

The national government had ordered the Madrid police to fine people if they left their municipality without justification. The measure includes 4.8 million residents in Madrid and nine suburban cities.

But the conservative regional government in Madrid opposed these restrictions, saying they were too harsh and harmful to the economy.

The dispute occurred against the background of political disagreements: the center-left Socialist Party leads the Spanish national government, while the Madrid region is run by the country’s main opposition party, the conservative Popular Party.

“It seems to me like an ideological war trying to show who has more power,” said Marta Elo, 18, a student.

“they [the Spanish Government] I really don’t like the regional government in Madrid.

“We, the people of Madrid, are paying the price for a really political battle that has nothing to do with us.”