AnTuTu today released its August smartphone performance rating. Unexpectedly, despite the release of smartphones based on Qualcomm Snapdragon 888+, the first line of the rating is occupied by a smartphone with the less powerful Snapdragon 888.


The flagship is still the gaming flagship of Xiaomi Black Shark 4 Pro, based on Snapdragon 888. The device gains 864,614 points in AnTuTu V9. The second place went to the iQOO 8 Pro, which is built on the latest Snapdragon 888+. The smartphone scored 846,351 points. Experts explain the current situation by the fact that AnTuTu tests all smartphone systems as a whole, and Black Shark 4 Pro is due to a much faster memory usage. As far as pure chipset performance is concerned, iQOO 8 will definitely show the best result.

Note that the statistics provided show the average results for each of the smartphones presented in the list. If a model has several options that differ in storage capacity and RAM, then the rating takes into account the more advanced version. 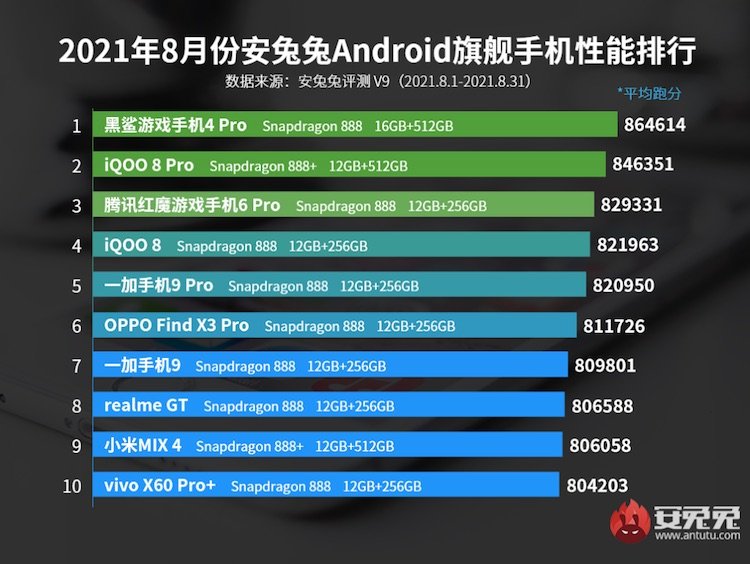 When it comes to mid-range smartphones, the leader in the performance ranking is Xiaomi 11 Youth Edition, powered by 5nm Snapdragon 780G. It shows the performance of 530,657 points. The Honor 50 Pro and Honor 50 occupy the second and third positions with 511,155 and 506,774 points, respectively. These devices are based on the Snapdragon 778G chipset. The rating of “middle peasants” also includes smartphones based on chips MediaTek Dimensity and HiSilicon Kirin 985. On the latter is based Huawei Nova 8, which closes the top ten. 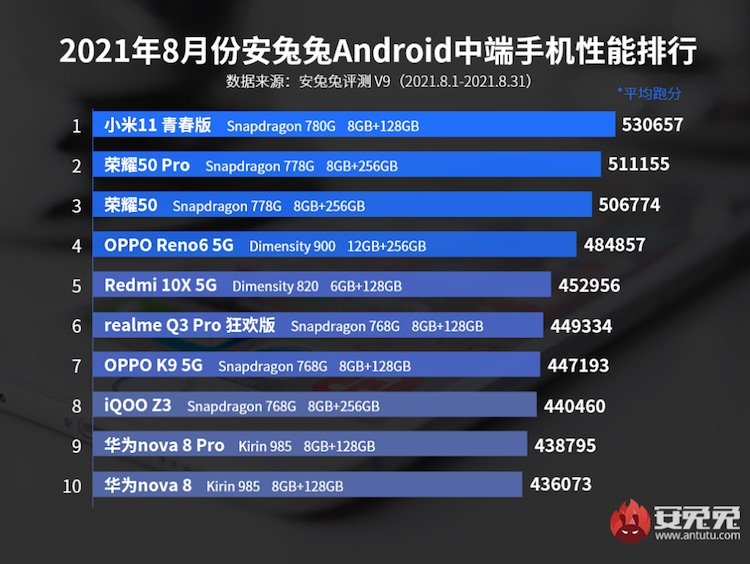 The rating of flagship devices is expected to change significantly in the coming months, as a wave of new Snapdragon 888+-based smartphones will come, including gaming devices. As for the devices of the middle class, there are no significant changes in the near future.

If you notice an error, select it with the mouse and press CTRL + ENTER.