It sounds depressing, but if the report teaches us anything, it’s certainly not for us to watch helplessly, says Slangen, a sea level researcher at the Royal Netherlands Institute for Sea Research (NIOZ). “How bad it gets is up to us,” she explains. “If we are really committed to reducing greenhouse gas emissions, we can even prevent global warming by up to 1.5 degrees.”


Read also
UN Climate Change: ‘The world is on the brink’

Sea level rise combines two important climatic processes – the warming of the oceans and the melting of glaciers in Antarctica and Greenland. “Sea level is a measure of climate thermometer,” explains Slangen. And the water is rising faster than ever. In 2018, sea level was 20 cm higher than it was 117 years ago. And between 2006 and 2018, it grew three times faster than it did between 1901 and 1971.

The sea level is very suitable for the Netherlands, because a very large part of our country is already below it. So Holland is kind of like an “empty bathtub,” says Slangen. The ledges are embankments along the coast, and we live at the bottom of this bathtub. “And the water from the outside is getting closer and closer to the edge. The higher the seawater, the higher the chance of it overturning the edge in a severe storm.”

The sea level rise we are already seeing is irreversible for the next several centuries or millennia. If we continue like this, by 2100 we will be in an annual increase of 12 mm, says Slangen. This means that the water is getting closer and closer to the edge of the bathtub, and we are more at risk of rising water near the coast during storms.

The optimistic researcher says there is also good news. We can slow it down by dramatically reducing greenhouse gas emissions. We are now at about 4 millimeters a year up, and we can stay there.” Every millimeter less means less dangers than very high in the water. “If we stick to half a meter high, current coastal defenses can do a lot more for us.”

But she says the Netherlands remains a “difficult place” to live. Whether it will always be safe here below sea level depends on the measures we take now. And that’s also a political question, because of course you’re not just leaving. What I can say is that the speed has to go. Reducing emissions gives us time to think about what we will do as a country if the sea level really does rise.”

Slangen says the report is intended for governments to use. “We give the numbers and we explain to you: You can go this way, or this way. And then it is up to the politicians to take action.” Slangin says governments do not have the right to free choice. Through the collaboration, they said: We stand behind this science. Because of that, they also surrounded themselves. Now they have to work.”

According to Slangen, everything you do as a citizen is a welcome bonus. “We all have to do it together. But the big hits can only come from big companies and governments. Because that’s where the biggest emissions are.” She says it’s especially important that countries don’t wait for each other. “Everyone has to cooperate – otherwise we won’t get there.” 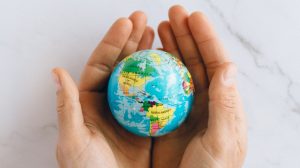