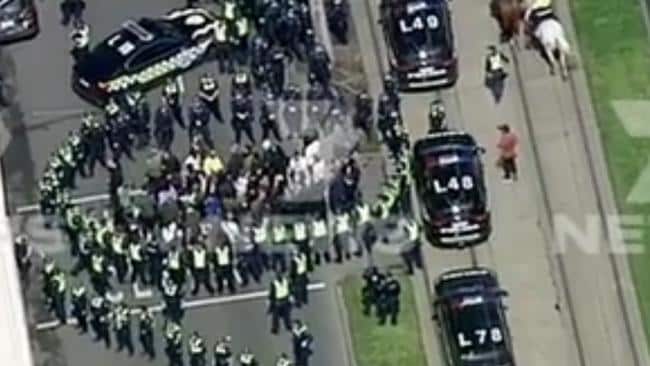 Dramatic footage of the arrests surfaced in Melbourne as anti-lockdown protesters ramp up their campaign.

Dozens of people were reported to have been detained in rallies today against the Victorian government’s restrictions against the Coronavirus, after 14 people were arrested on Saturday.

There was a heavy police presence and “severe tensions” in the Queen Victoria Market, as dozens of protesters flooded the area.

Several people were arrested and fined, with police escorting more protesters away as they contain the protest.

Bell Street as the protesters marched was completely closed.

In the photos posted on Twitter, protesters can be seen lining up outside the market, and they were reportedly sucking on straws in defiance of the masks.

But the police presence appears to outweigh the protesters.

a Herald Sun The reporter said that tensions are escalating with helicopters flying over the area.

One woman also said that there had been a “significant police presence” at the Shrine of Remembrance in Kings Domain.

“I just saw police officers surround two of the protesters with ‘corrupt’ flags and anti-lockdown signs on St Kilda Road,” she said.

Organizers have reportedly used encrypted phone apps to communicate, in a desperate attempt to evade the police.

The Herald Sun Reports that they encouraged the attendees to “be agile, to be like water”.

“Be prepared to gather at the gathering place,” said protest organizer David.

“Once we get together, we’re all safe.

“Conducting these protests depends on the presence of large enough numbers to exceed the number of any police presence at the gathering site.

“The best way to do this is to make sure you have spoken to everyone you know who might be interested in attending, and to try to bring at least one other person with you.

“If we can double the number of protests week after week, we will send a clear message that Victoria will not forgive and will not forget to suspend our freedoms.”

This comes at a time when the police issued a warning to the anti-closure demonstrators after marches witnessed the scheduled arrest of 14 people yesterday.

Authorities prepared for hundreds of people to attend the planned “Freedom March” across Melbourne’s CBD on Saturday, although the turnout was not as extreme as expected.

The director of the group admitted that yesterday’s march was not as intense as they wanted and expected the day to witness a higher turnout.

They said, “A lot of people attended, but the police planning prevented people from gathering, so they had to scatter.”

“Tomorrow the police will be in the back, and we will be able to get up.”