Three out of ten articles by Dutch scientists ended up behind the paywall last year and could not be accessed for free by outsiders. The Netherlands is leading the way, but the goal has not been achieved.

Last year, 71 percent of scientific articles written by Dutch researchers could be read free of charge for everyone, according to a census by the Rathenau Institute. However, there is an upward trend. In the previous year, 66 percent had been published in Open Access.

The government wanted all publicly funded research to be freely available to everyone by 2020. Logic: If the government funds the research, taxpayers can also know the results.

This requires a transformation. In the old system, publishers make a profit through subscriptions to their magazines, while publishing is free. With open access, it’s the opposite: reading is free, but publishing costs scientists money.

There are many reasons why the cover is not complete yet. Some scholars like to publish in reputable journals and consider that they do not have free access to them. It also happens that they collaborate with foreign researchers who make a different choice.

Research funder NWO announced last month that it would closely monitor the publication in open access. Universities meanwhile are trying to convince more and more publishers through negotiations.

There are different types of open access: Gold, Green and Bronze. With Open Access Gold, the articles can be read free of charge on the journals website, with Open Access Green, they are in the online archive of the institution where scholars work. Bronze means it’s only available for free for a limited time, which is rare now.

The Netherlands is an international leader in the battle for open access. After the Netherlands are Norway, Sweden and Finland. Scientists in the United States publish only 45 percent of their publications in the public domain. 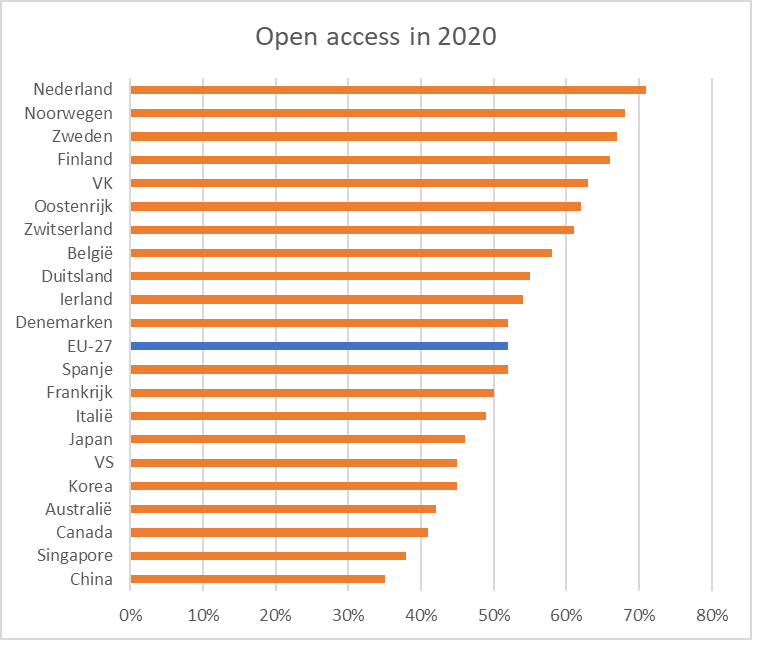 More and more articles appear in open access, but it is difficult to make an accurate count. The Rathenau Institute uses data in the Web of Science, which in turn uses its own database of articles in Open Access (Unpaywall). This database is completely reliable, but not complete. In addition, the social sciences and humanities are underrepresented in the Web of Science.