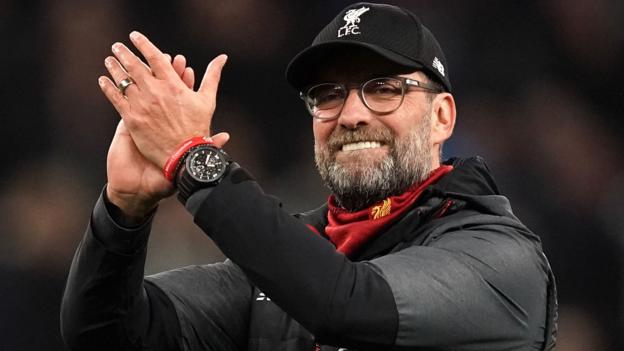 Liverpool manager Jurgen Klopp says “history is no burden any more” after he led the club to their first league title in 30 years.

The Reds were crowned Premier League champions after Manchester City’s defeat at Chelsea on Thursday.

The title triumph is the Anfield club’s 19th overall but first since 1990.

“Without knowing it at the time, the most important thing I said to the players was that we have to create our own stories and own history,” he said.

“The history is no burden any more. It is the basis for what we are doing.”

City’s 2-1 loss at Stamford Bridge means Liverpool have a 23-point gap at the top of the table with seven games remaining.

“When I came in, I had to tell them not to compare themselves with anyone any more, some of the fantastic people who played for this club and won everything in the past,” added Klopp.

“We needed to get the opportunity from our supporters to find our own way, and this is only possible because people never lost patience with us in any moment.”

“Football management is a nice job but it is a difficult one as well as we cannot always ask for time, we need to deliver immediately.

“People have to see the steps we are making and the people saw them because they wanted to see them. So this story was possible.

“We got rid of the heavy backpack. I took it off that day and never got it back.”