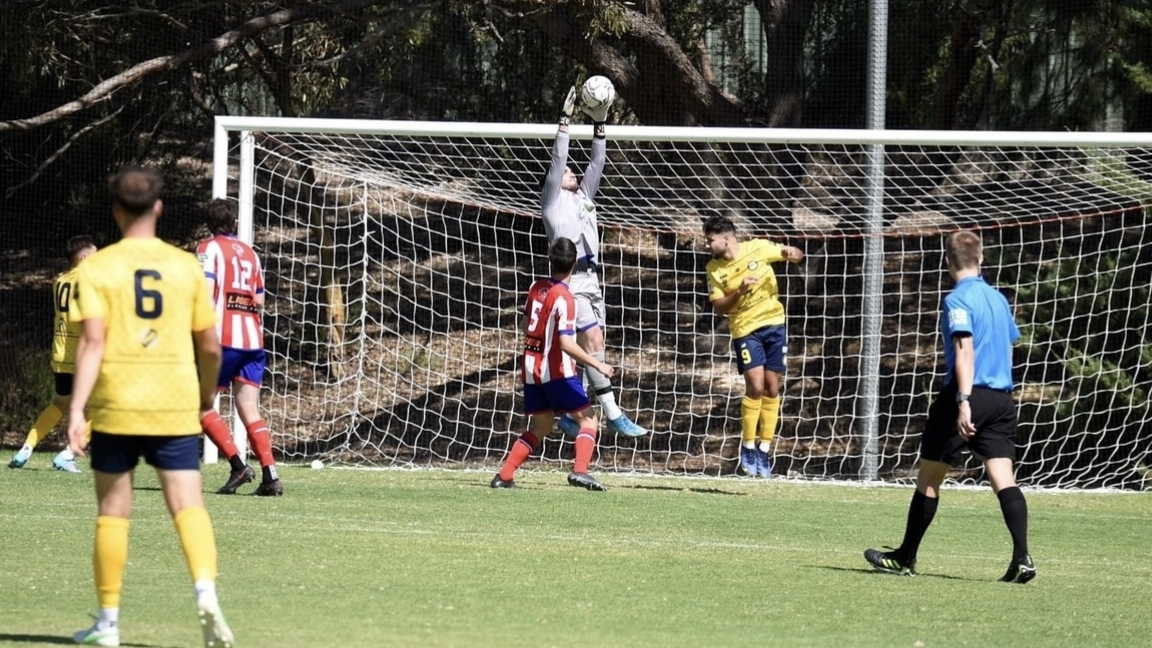 Professional Dutch footballers can be found all over the world, from the spotlights of the major European leagues to the most adventurous jobs on other continents. In the section speaks across the border football zone Weekly with active player outside the national borders. This time with attention to Stephen Van Dyck, who gave up his job as a physiotherapist to venture into Iceland and now ends up in Australia.

It is appropriate and measured to make an appointment with Stephen Van Dyck. After 9.5 hours in his hometown of Adelaide. “So when the day begins in Holland, I’m about to fall asleep. Yes, you have to think about that for a while,” van Dijk laughs. Travel delays due to the huge time difference made the 24-year-old goalkeeper’s early days on the other side of the world particularly difficult. “I was playing my first practice match with jet lag. Actually I thought I wasn’t going to play, but the coach said he wanted me to start. Then I thought, ‘Oh, shit. I didn’t feel fit well.’ In the end I was glad I played, because it went well. truly “.

The great distance to the Netherlands was something Van Dijk thought about when the offer came from The Cove – an ambitious club in the fourth tier of Australian football -. But he and his family soon come to the conclusion: These are opportunities you’ll never have again if you let them pass now. “I don’t have a girlfriend or kids, so I don’t have to take a lot of things into consideration. It may not be possible in five years, so now is the time to take this opportunity and try to make the most of my career,” explains Van Dyck. What may also play a role is that he has already somewhat said goodbye to his dream of becoming a professional footballer for himself.

Van Dijk played for Go Ahead Eagles youth academy, Vitesse, NEC and FC Den Bosch, but disappeared into the amateur football ranks in 2019. “In the Netherlands, it’s best to be written off quickly. Once you get into amateur football, it becomes difficult. I had moments when I was completely done with it, when I didn’t like it anymore and I didn’t like it anymore. ‘I’m glad I’ve kept discipline,’ says Van Dyck. ‘It was, however, a scenario he had prepared for. Partially because of the words he heard in Several professional clubs during his youth – “of the team here, only one person will join the first team” – decided four years ago to enroll in physical therapy. “It is extra work, because you train during the day and then have to work in the evening. But professional football is for very few people and it is very painful if you have nothing to take away.” 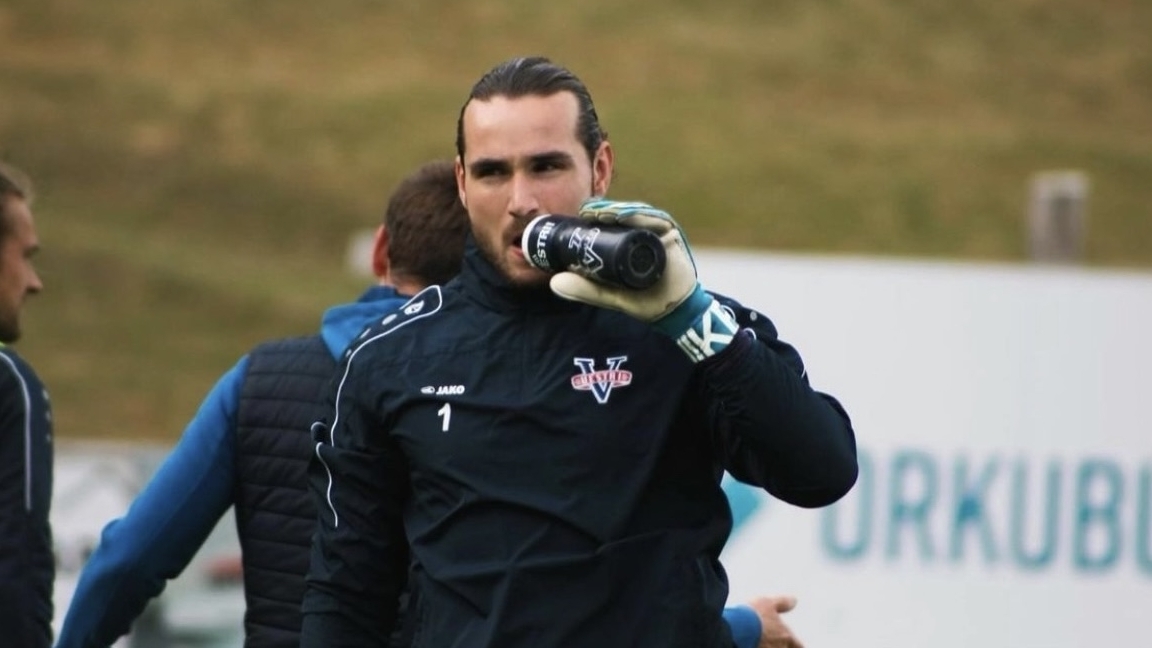 Van Dijk is at the training ground in Vestry, where he has been active for the past six months.

In recent years, Van Dijk worked as a physiotherapist in addition to playing football for FC Lienden and later HSC’21, but he didn’t hesitate for a moment when his agent Jo Yoffe made an offer from Iceland six months ago. “On Thursday I was asked if I was open to Iceland. Well, I liked that, on Saturday evening, the plane ticket was in the mail and on Sunday I landed in Iceland.” From Reykjavik Airport, it’s another six-hour drive to his new hometown of Ísafjördur, located at the far northwest tip of Iceland. “It’s beautiful there, really pure nature. But there is not much, in that village four thousand people lived. A small center with a bakery, a supermarket and a gas station, but that’s it. There was absolutely nothing to do there. Everything We as players had each other. So we were on each other’s lips every day and that’s why we built a very good relationship.”

In the Foreign Legion, as he calls himself with players from Spain, Italy, Zimbabwe, Antigua and Barbuda, Denmark, Senegal, England and France, Van Dijk was usually a reserve guard. However, the ambitious club – which reached the Icelandic Cup semi-finals last season by eliminating Valor (“Icelandic Ajax”) among others – wanted to continue with Van Dijk. “I had a great time at Vestri, but in the end the new contract offer wasn’t great for me. If it wasn’t good enough, I’d rather be with my family and friends. You leave everything behind, so it must be the way it is.” Alright. There were some in Iceland at another club. But I didn’t see it that way.”

Then he asked his agent what Van Dijk wanted most: Are you trying to stay in Iceland or go somewhere else? Van Dijk replied, “I’m actually open to anything, as long as I can burn for a whole season and show myself.” So it became Australia. “I’ve never been to Australia before. It was still on my list anyway, but now I’ll definitely be traveling within Australia after the season,” van Dijk smiles. The Cove is a relatively young Adelaide club that has the ambition to be promoted from the fourth tier of Australian football in the next five years and already wants play-offs this season. “After the conversation with the coach, I quickly felt that they wanted me. The club is very small, but they have a new investor who has spent a lot of money in it. He built a whole new complex, it cost seven million euros. There is a lot of money. We are moving next month and that’s it.” Well arranged, good pitches, artificial turf: you can see that the club wants to make progress in all areas.”

See also  Steve Barnes of Celino and Barnes, the law firm, dies in a plane crash

Van Dijk could have moved up to Level Two in a week. After two training matches, his coach was asked if he was interested in the switch. “I didn’t do it because it would be disrespectful to the club that has already arranged a lot for me. Maybe it stands out a little more if you come from Holland. Your name will be passed on and I’m happy with that, because after this year I want to move to the second tier. I notice that the pressure on foreign players is higher. A little bit. They look forward to Europe, because it’s the best in terms of football school. It’s only good that they expect something from you, that’s part of it.” Lower tier clubs are allowed in Australia with three so-called Visa players Owns. In addition to Van Dijk, The Cove has another Japanese player under contract, but has chosen to live with a host family.

Partly for this reason, Van Dyck has an apartment for himself in Adelaide. It is in stark contrast to the time he spent in Iceland, where he lived with his colleagues. “There was always something going on, it was always fun. Everything is so well organized, no matter what. But I still have to find my way into it a little bit, because I don’t have many people here yet. I get off the street here and walk straight on The beach. The apartment is so big actually, you can easily live with two or three people.” The Cove trains four times a week and due to the temperature, those sessions take place in the evenings. “Then it gets a little cooler. It’s very hot, the temperature is over thirty degrees. I still see some things from my teammates from Iceland, who are now on their skis because there’s a lot of snow. That contrast is funny: I left Iceland when The temperature was minus 5 and here the temperature was already more than 35 degrees. ”

Since the training takes place in the evening, Van Dijk has time during the day to complete his thesis and thus his studies. Despite the fact that The Cove is a semi-professional club, Van Dijk doesn’t have to do anything else to make ends meet. “But these other guys are just working or studying. I’m a training animal, so it was kind of a switch. I like to train twice a day, so I take those extra moments for myself. At the gym or with teammates on the court.” According to Van Dijk, the level in The Cove can be compared to the bottom of the third division or the top of the Eredivisie major. “It’s hard to say. It’s not striking and first class when it comes to football, but the experience is very high and everyone is in top shape.”

See also  What occurred on Santorini when the tourism 'machine' stopped 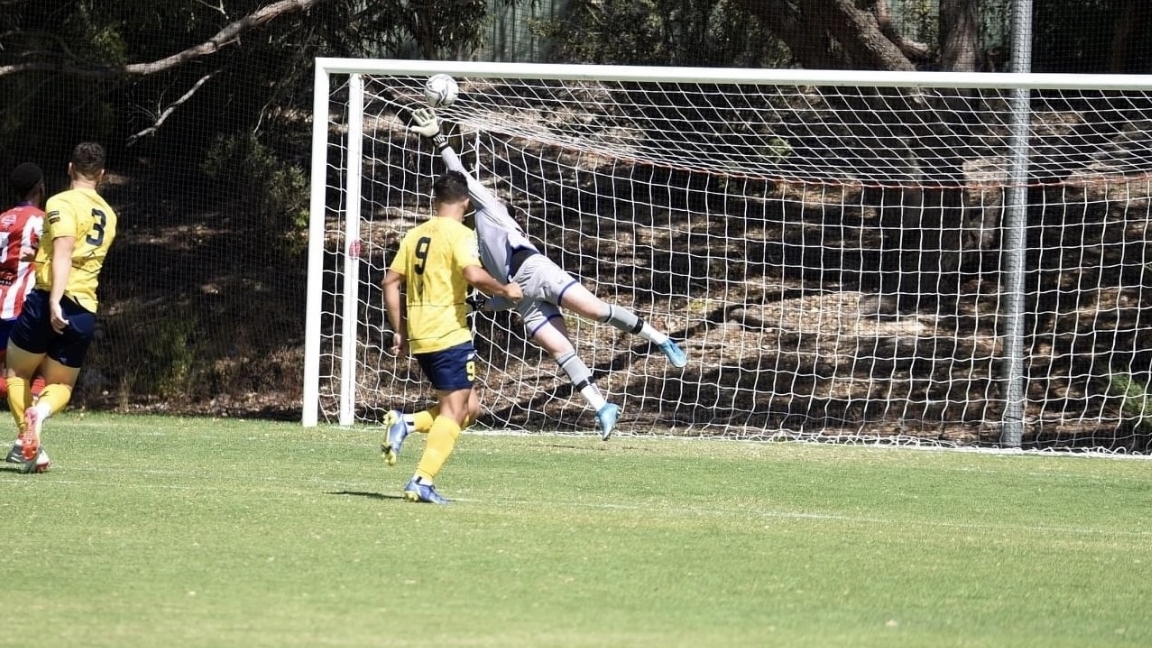 Van Dijk performs a rescue on behalf of The Cove in one of the premiere games.

“It’s a very different kind of football, I had to get used to it. A lot of long balls, a lot of physical activity: that’s very hard on the goalkeeper, and you’re expected to play well from your goal and read the game. That’s just good, because that’s it.” The areas I want to improve myself in. I am happy that I am here and can play 25-30 games a season, to be back in the picture,” continues Van Dijk. He hopes to earn a step up to the second division this season. “Life is so beautiful, I really enjoy it every day and am grateful that I can sit here. But in the end you are also a great athlete, you do and leave so much for him and I want to continue beyond this year. We will have to see if that is here. I don’t know. How do I feel about it after this season. If I feel the way I feel now, then I would like to stay in Australia.”

There is a clear spot looming in Australian football: the A-League, the highest level. More specifically in his hometown: Adelaide United. “You have to dream big, right. I would never say it out loud, but if you can go to the second tier next year, you should also dream after that. The A-League is a great competition, and now I follow it closely. I get excited when I see it and talk to it. About him. You don’t know what happens in football. Maybe after this year I will play in another country, and I’m very flexible about that. But I still see myself playing football here next year. Dreaming is allowed and it should keep you sharp too.”