For Mormons, they attended the boring, boring opening day of the General Conference 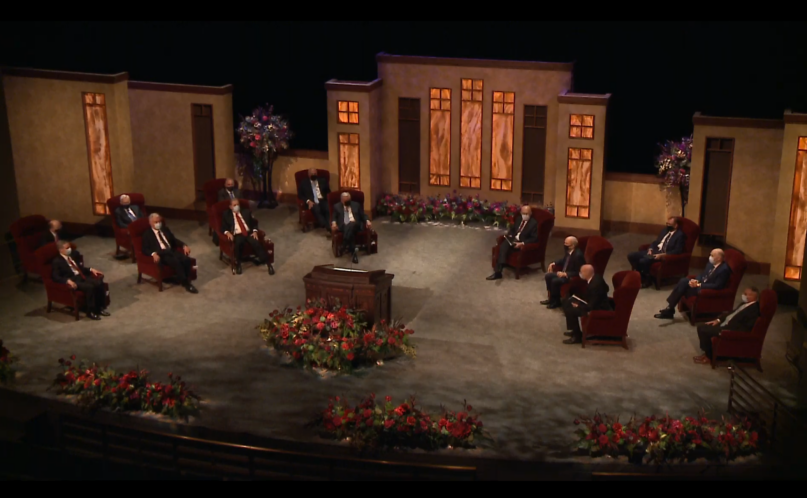 For the second time this year, Latter Days Saint leaders delivered their semi-annual remarks at the General Conference in a nearly empty room, empty of thousands of devoted attendees and absent from live music from the temple choir in the Temple Square (formerly called Mormon Tabernacle Choir).

But other than that, it was an absolutely normal conference of the Church of Jesus Christ of Latter-day Saints, devoid of any announcements on the edge of your seat and focused instead on clinging to spiritual essentials during an uncertain time.

While some recent conferences have been exaggerated in advance as historic or game-changing, there has been very little preparation for this weekend. The church’s statement about it was simply that “as the world grapples with global pandemic, economic hardship, social issues, political turmoil, and uncertainty,” church leaders will focus on the Savior’s messages of love, understanding, acceptance, hope, connection, and inclusion.

And that’s exactly what they did on the first day. Today’s conference was like cornflakes – nutritious, fortified and happily predictable. I am a fan of Korn Flex. For me, watching from home via YouTube after a tumultuous week in our nation was amazing. It was boring useful. Gave me boring time to think.

This year has been crazy, to put it mildly. I complained in April that the General Conference was a missed opportunity: The world was in the early throes of a terrible pandemic accompanied by economic and social uncertainty, but our church chose to stick to its original plan to celebrate 200The tenth Memory of the Gospel Restoration. It felt like we were throwing ourselves a birthday party while the world was on fire. Only one talk, from Elder Holland, seemed so direct (and lovely) directed at the moment. Other than that, the conversations came like pre-recorded choral standards from previous years: timeless but largely forgettable.

I didn’t feel that way today, because most of the conversations are Act An indication of the epidemic and even the accompanying political and social turmoil in America and elsewhere in the world. Since the opening prayer, when Sheikh Patrick Kerron requested the blessing of the Lord on all the sick, the mourned, or the marginalized – he also added a directed plea for a return to grace, dignity, and civilization in public life (important!) The theme of the day was set.

Sheikh David Bidnar started things by acknowledging the elephant in the room – “a global pandemic that we have proven, examined, and tried in a number of ways” – then focused the classic Mormon speech on how lessons are learned from difficult times. As 2 Nephi 2: 2 says, “God will consecrate our affliction for our gains.” What can we learn from this unprecedented experience?

Two of the talks focused on the political and social divisions that have certainly worried millions this year. Elder Quentin Cook noted that we are “living in a moment of particularly intense division” while Michelle Craig of the Young Women Presidency relied on the wisdom of columnist David Brooks to point out the number of societal problems that stem from our failure (or our refusal) to see each other deeply. I have definitely fallen prey to that this year.

If there was a moment of argument, it came in Pres. Dalin Oaks notes when he initially focused on the problems caused by individuals who transcend the boundaries of peaceful protest and destroy property, without discussing the severity of the racial persecution that could lead to this behavior. He got there in the end, citing NAACP Leader Reverend Theresa Derr on the way racism thrives on hatred, negativity, indifference and silence. Oaks condemned racism and said that we must do better to eradicate it, but he did not mention the history of the Church as a contribution to that racism or an apology for it. Hope your much-needed apology comes soon.

Oaks also issued a clear statement that members of the Church “must abandon the anger and hatred with which political options are discussed or denounced in many places.” To be more specific, we are expected to “peacefully accept the election results,” which seemed a direct indication of President Trump’s refusal to pledge to do exactly that, even though he never mentioned the president by name.

It was a great decision that Elder Uchtdorf, the most authoritative and least political of the Twelve, brought it all home with the last talk of that day. He addressed the virus face to face: “To those who regret the loss of family and friends, we mourn with you. We implore the Heavenly Father to comfort you and comfort you. He acknowledged the prevailing uncertainty, loss of income, and pain experienced by many, and said he felt humbled by the heroic actions of first responders and other helpers.

He said that there was still a lot of unknown about this virus, but he “did not surprise Heavenly Father.” This is not what we wanted or expected, but “God prepared his children and his church for this time.”

Elder Uchtdorf promised that we would tolerate this. And not just where we clench our teeth and cling to our dearest lives, but actually where we come out better on the other side. May God protect us. God will keep his promises. Things will get worse before they get better. . . But we have to choose how we prepare and how we react.