58 German doctors and scientists believe that compulsory vaccination against SARS-CoV-2 cannot be justified in the current situation on the basis of medical, legal, philosophical, as well as moral and religious arguments, so this decision must be taken individually. They summarize their position in seven arguments that correspond to the positions of thousands of scholars in Austria, Switzerland, Italy, France, Scandinavia, Great Britain and the United States.

The seven arguments (in German) can be summarized as follows:

1. The SARS-CoV-2 pandemic will not end with vaccination.

Weak and short immunization with the possibility of transmission, unable to adapt to virus variants and possible amplification of variants through the role of the so-called selection pressure
With full vaccination of the population.

Selection pressure is the biological term for the sum of all limiting environmental factors, which reduce population growth (and chance of survival).

2. The potential risks of vaccines are very high:

No systematic research and long-term studies on new gene-based vaccines with increased mortality and worrisome side effects: significant increase in cardiovascular and neurological disorders; Increased risk of infarction. misunderstanding of the effect of elevated proteins on human cell metabolism; The results indicate additional sensitivity to the omikron variant.

3. The potential risks of multiple administration of the SARS-CoV-2 vaccination have not been adequately studied:

There are no data on the effects of more than two vaccinations and the safety of the procedure. 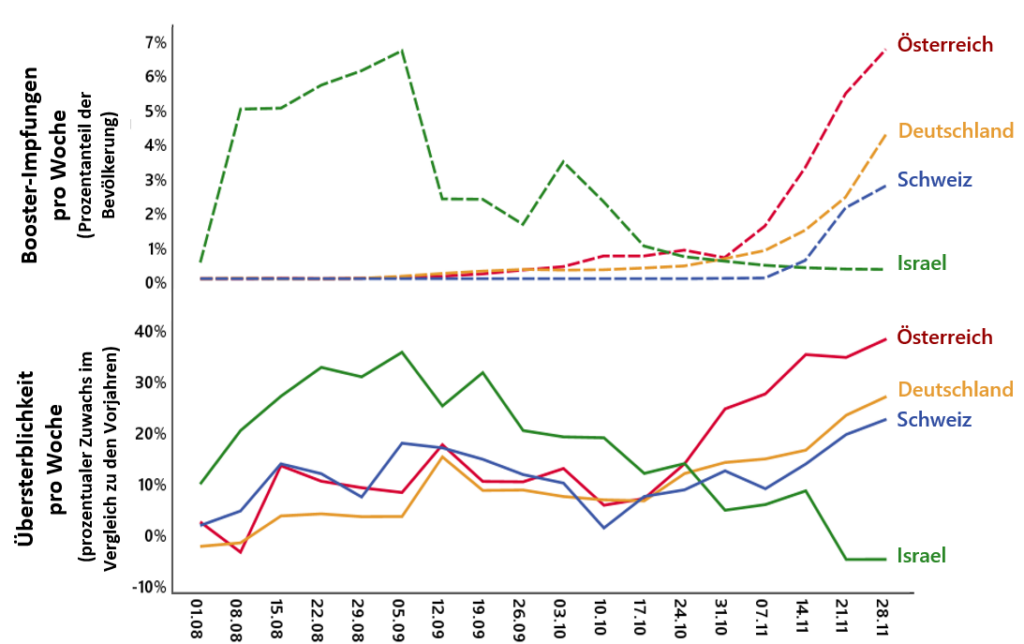 These first three arguments are supported by the graphs below, which show that there is a clearly visible relationship between vaccinations and excess mortality:

The international chart shows the same pattern:
4. The obligation to vaccinate with the currently approved Covid19 vaccines violates German constitutional law:
Article 1: Man is the end of the law, not the means;

Article 2: the right to self-determination with regard to medical interventions for the physical, mental and physical integrity of the person concerned;

Article 4: Freedom of belief and conscience.

5- The statistics have not clearly demonstrated the excessive burden on hospitals by Covid19 patients:

No clarity about patients due to or with Covid; Economic constraints and political incentives in the therapeutic capacity provided for Covid-19.

Current discussions about the trend of lower number of beds reported as ‘operational’ under changing funding conditions have led to the question: Could this system rather not be mitigated through adequate and transparent administrative and financial support?

6. Measures other than vaccination shall not be exhausted:

Improving working conditions for nurses and doctors, maintaining or restocking beds in intensive care units, and developing and implementing treatments and medicines.

7. The obligation to vaccinate against the Covid19 virus imposes social struggles:

Citizens who willfully oppose vaccination on medical, ideological, religious or other grounds are ostracized, and may even face persecution. Simplified definitions (“vaccinated” – “unvaccinated”) reinforce polarization in our society; Euphemistic abbreviations such as “2-G” mask the fact that a (large) minority are systematically, overtly, and rigidly excluded from social life. The resulting conflicts undermine the rule of law and democracy.

These 58 German doctors and scientists ended their argument and call them:

“Arguments are not directed against a particular objective viewpoint. Rather, they are arguments for the fact that it is important in the current situation to develop a position of joint questioning in science. This position does not exist at the moment. This position can enable us to obtain a solid foundation for collective relief. From health and mental distress in all dimensions of the crisis.
We ask, in this spirit of freedom of science and human dignity, for a concerted effort to overcome the current situation of multiple suffering and division in our society and permanently heal its scars.”

Support us, be a friend!

Together we stand stronger. From fear to confidence! Disclaimer: The Doctors Collective is not responsible for the content of the above mentioned third party referenced pages. Sharing a page does not mean that the group of doctors shares all views. The Physician Group supports the uncensored collection and exchange of (medical) information in order to stimulate open conversation/scientific discussion.