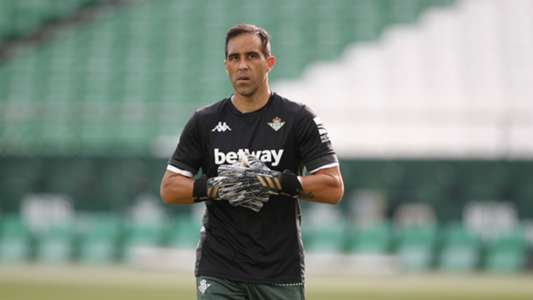 Claudio Bravo criticized the referee’s decision not to award Chile a late penalty in their 2-1 loss to Uruguay in Thursday’s World Cup qualifiers.

Luis Suarez opened the scoring for the hosts with a penalty kick before Alexis Sanchez equalized for Chile at the start of the second half.

The visitors seemed more likely to score in the final stages and were denied a penalty in the stages of death after the ball struck the hand of Uruguayan defender Sebastian Coates in the penalty area.

VAR appeared to reverse the incident, but no penalty was awarded, and Coates deemed he had placed his hand to his side instead of the ball.

The decision would be costly as Uruguay went up to the other end and scored the winning goal in injury time via substitute Maxi Gomez.

Bravo, who was unable to play for Chile due to injury, was not happy that his team had not received a penalty at such an important moment and took to social media to express his anger.

“I don’t believe you … Impossible when these things happen. Terrible !!” he is chirp.

“If you call it what we all see, we’ll give 1-2 if the penalty kick is awarded in the 90th minute. And you kill the match. With details like this it is impossible to score. Sorry !!!”

Before the match, Bravo had been wishing his team-mates luck as they looked to qualify for the 2022 World Cup in Qatar.

“The road is very long, but satisfaction in the end is unimaginable,” he wrote Twitter.

“For those who are just starting out, don’t miss the opportunities and those with more experience just keep believing LaRoja forever !!! Let’s go … just one goal.”

Chile failed to qualify for the 2018 World Cup in Russia, but it reached the previous two tournaments, reaching the round of 16 both times.

Reynaldo Rueda’s side will seek to recover from their controversial defeat to Uruguay when they host Colombia on Tuesday. Meanwhile, Uruguay will travel to Ecuador that same night as they look to extend their unbeaten streak to eight matches.

Bravo, who currently plays for Real Betis, will undoubtedly be watching the games closely.