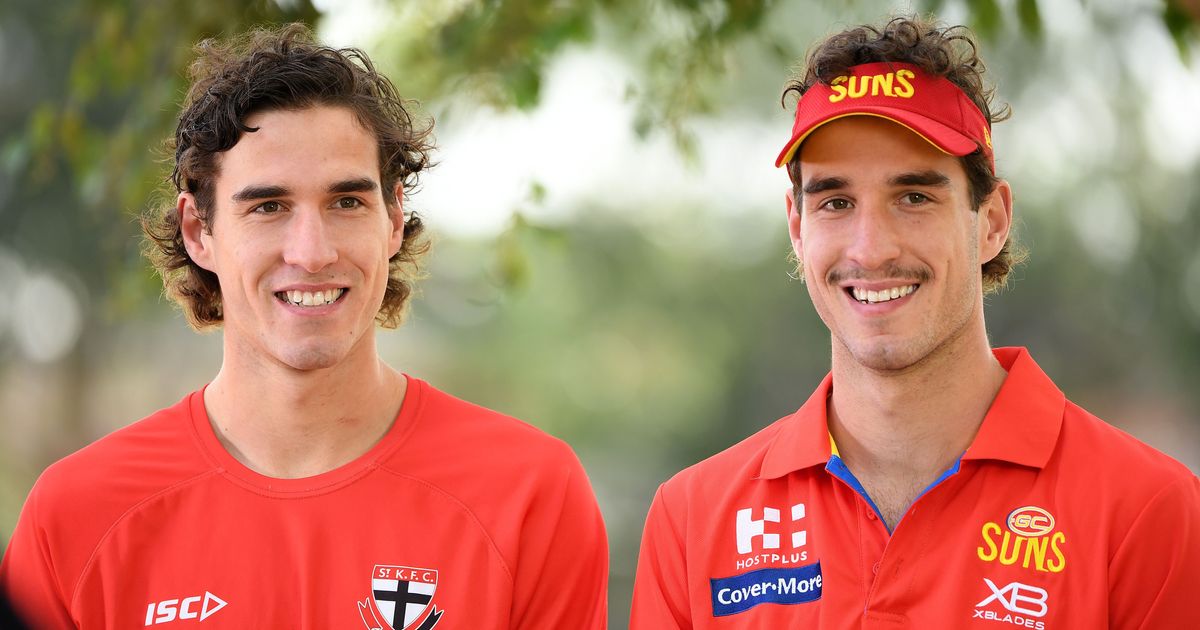 THE STORY goes that Ben King had his brother Max in a headlock after a disagreement over a foul on their Hampton home’s basketball court.

Their father, Brook, burst out the back door and had to drag Ben off his other teenage son, both of whom were well and truly on the AFL radar by then.

Or that’s how Ben tells it, anyway.

“He’ll probably deny that, but he had to get Dad to come help him out. I had him covered – he was in strife,” Ben told AFL.com.au this week.

THE LADDER Where is your team sitting?

Max, of course, saw it quite differently.

“I think each time he tells this story he puts a bit more mayo on it,” Max said.

“It’s just that mental toll of him losing in basketball every time, so he put me in a headlock.

“He claims Dad came running out to drag him off me, but I don’t know if that was the case. I think I was going OK.”

It was one of the countless times the King brothers locked horns in their family backyard – in football, cricket, basketball or even downball – but they never have in an organised team capacity.

ROUNDS 10-12 Check out the full fixture

If one of us played well but the other didn’t, it wasn’t a great result for us, so we steered clear of each other.

The 20-year-old identical twins are the game’s brightest key forward prospects, having grown up playing together at East Sandringham, Sandringham Dragons, Haileybury College and Victoria Metro.

They were snapped up in the much-vaunted 2018 NAB AFL Draft – Max at No.4 and Ben two picks later – and are already living up to the immense hype.

The King brothers spoke to AFL.com.au about their journey to the big time, what Thursday night’s match will mean to them and their family, and what makes their sibling great.

Marc McGowan: What does it mean to be playing an AFL game against your brother?

Ben King: All we ever dreamed of growing up was playing in the AFL. We’ve both already debuted, but to be playing in the same game together is a pretty special moment for us and also our family and mum (Marni) and dad watching at home.

Max King: It’ll be pretty weird being on different teams, because we’ve always been on the same team, but it’ll just be cool and a bit of a proud moment for our family. I’m looking forward to it.

MM: So you’ve never played against each other in any official match, in any sport?

BK: There’s been a few scratch (football) matches over the years, where we’ve been on different teams, but this is the first official game against each other. We never really played on each other, even though I was a defender and he was a forward. We had an agreement not to play on each other, because we both wanted each other to do well. If one of us played well but the other didn’t, it wasn’t a great result for us, so we steered clear of each other.

MM: How different was the lead-up to this game, given you’re playing each other?

MK: There’s been lots of messages from friends and family and things like that. I’ve had a few chats to him during the week to talk about the game, so it’s a pretty standard week but at the same time it’s in the back of my mind.

MK: Not really. (laughing) I can’t say some of the stuff he’s said. He asked for me to try not to talk trash to the good blokes in his team. He’s got a few mates down back he doesn’t want me getting into, but we’ll see how we go with that one.

MM: Will you seek Ben out before the game, or will you leave that until afterwards?

MK: ‘Ratts’ (St Kilda coach Brett Ratten) has been joking that he’ll start me at full-back and I’ll rough him up, but I’ll probably just have a little chat to him in the pre-game, then a little debrief after the game.”

HOW THE KINGS COMPARE

* All statistics are per 100 minutes of game time, to balance Max and Ben King playing matches in shortened 2020 games.

MM: What do you make of the fascination everyone has with you two?

BK: Sometimes it’s a bit weird, because it’s all we’ve ever known. Being twins seems normal to us – but I can understand it. Sometimes you do take a step back and think how bizarre it is that we’re identical twins and we’ve both been lucky enough to make it to the professional level in the same sport.

MM: I hear you guys love the Klitschko brothers, who dominated heavyweight boxing for more than a decade. What do you admire about them?

BK: We watched a doco on them a few years ago and it just resonated with us; some of the stuff they were saying about brotherhood and how they helped each other become elite boxers. I forget which one said it, but he said they trained so much together and helped each other out so much that even when just one of them is in the ring, the other person is actually fighting two of them, because of their combined knowledge. I found that pretty powerful.

MM: Do you gravitate towards any other twins in the sporting world?

MK: Probably the Morris brothers (Marcus and Markieff) in the NBA. They’re pretty interesting. All the tattoos on their body are exactly the same. They’re both covered, which is pretty cool. I guess when the McKay brothers (Harry and Ben) got drafted (to Carlton and North Melbourne, respectively, in 2015), we took an interest in them. It’s good to see they’re playing some good footy.

MM: How much did your backyard battles help you become professional athletes?

BK: They helped enormously. The foundation of just competing from an early age and always having a ball sport going in the backyard shaped us a lot. Growing up and developing, you’ve got someone who’s pretty much at your level with everything, or is a great competitor with you the whole way, so without having Max to compete with, I definitely wouldn’t be in the position I am today.

MM: Ben, the COVID-19 outbreak and subsequent AFL shutdown brought you back to Victoria for a few months. What was it like being home again?

BK: It was a bit weird, in a way, because I haven’t lived at home for a long time, with mum and dad and Max, but I felt right at home straight away. Mum’s made a conscious effort to leave my room as it was, so it felt like home when I got back. I’ve actually got a life-size ‘Buddy’ Franklin sticker on my bedroom wall. He was my favourite player growing up, so I’ve still got that in there.

MM: What was it like having Ben back home for a bit?

MK: It was obviously not the circumstances that we wanted him back in town, with everyone not playing footy, but it was a good chance to spend some time together and do some training together. He’s still the same old guy – a bit stronger – but he was rocking a dirty moustache, which was pretty confronting for the family to see, but he’s pretty much the same old Ben.

MM: Do you have any amusing stories from your childhood?

BK: Swapping classes at school was one that came to mind. The teachers would walk past (Max) and say, ‘Hey Ben’ and he’d just roll with it and end up in a convo with them. There were little ones like that, where, for a brief moment, you have to cop pretending to be the other person, but you get used to it. It can be a bit embarrassing for them, so generally it’s easier just to cop it, as long as you don’t get caught in an elaborate conversation.

MM: How are you two different? Physically, and personality wise?

BK: He’s got a different haircut at the moment, but apart from that, facially, I feel like we’re so different. I’ve got more of a narrow face and just little features like that. Personality wise, it’s a weird one – we are really similar, but we do have slight personality differences. If you know us well, you’d probably notice it. I wouldn’t say one of us is more outgoing, but at school I was more geared towards writing and English, whereas he was more of a numbers man and into maths (although they’re both studying commerce at university).

MM: In general, what does it mean to be sharing the AFL experience with your brother?

MK: I just love watching him play each week. It’s sort of like you’re watching yourself play again. I’m so invested in him that it’s like I’m riding every bump in his games as well. It’s pretty cool.

MM: What have you made of the start of Ben’s AFL career?

MK: He finished last year really strongly, and he’s started really well this year. It can be tough for him, being the main man in their forward line, but I think he’s doing a really good job. People mention how talented he is, but a lot of it is hard work. Some people don’t appreciate it as much or see it, because he’s pretty outgoing, but when it’s time to work, he works very hard.

MM: Why is Max having so much success early in his career?

BK: Hard work. From a young age, it’s kind of all he’s ever wanted. He’s really big on doing extras, and he watched a lot of football growing up. He just aspired to be like those players, like Nick Riewoldt, and trying to take stuff for his game. Also, the obvious one is him overcoming his ACL (rupture in 2018). The work he put in to get his body right and get his confidence back was incredible, so I’m really glad to see him back out there and I’m really proud of him.