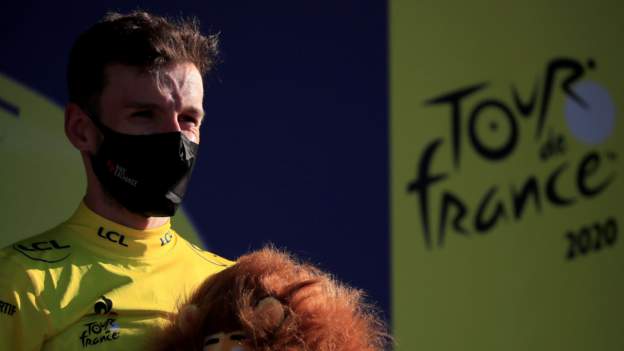 Britain’s Adam Yates moved to the top of the Tour de France after Julian Alavelippi was awarded a 20-second penalty kick in the fifth stage, which was won by Woot van Aert.

Frenchman Alaphilippe, now 16th in the overall standings, was penalized for taking a bottle of a team support member within the last 20 km.

Yates is 3 seconds ahead of Primus Rogelic in yellow jersey.

“This is not the way I imagined in the yellow shirt,” Yates said.

“ If you’re being honest, nobody wants to take a shirt like this.

“I was looking forward to taking the shirt in Stage Seven anyway so I’ll go in with the same tactic – try to win the stage and see what happens.”

Yates is the ninth different British racer to lead the round and the first since Girante Thomas’ victory in 2018.

Alaphilippe led Yates in four seconds and appeared to have kept the yellow jersey after finishing safely in the Privas collection.

But television pictures showed that he is given a 17.8-kilometer bottle of water to travel – according to the rules of the global governing body, the UCI, passengers are not allowed to eat or drink in the last 20 kilometers of the stage.

It was a strange way for the French to lose the shirt he had worn by winning the second stage, especially after he rode Dikkunink-Kwik-Step in the front of the Peloton most of the day to protect Alavelippi and stabilize hostility Sam Bennett.

Bennett was able to take third place behind Van Ayrt and Dutchman Sees Paul, snatching the green shirt from Peter Sagan, who was fourth.

Bennett is the first Irishman to lead any ranking on the tour since 1989, when the great Sean Kelly won the last of his four green shirts.

Also by beating Sagan in the middle sprint, Bennett showed his intention to challenge Sagan on the points rating, which the Slovaks are trying to win for the eighth time, a record.

Van Airt emerged from a sprint to knock Paul out and win in four hours 21 minutes 22 seconds.

The fifth stage saw riders dealing with a 183 km long road from Gap to Prevas.

The result of the fifth stage

General classification after the fifth stage