Leidschendam – Last week was a party by Huub van der Heiden, who had already celebrated its centenary on April 5.

On Thursday, the mayor and his wife visited the 100-year-old young man in his garden and handed over a bouquet of beautiful flowers. While enjoying a cup of coffee and pastry, Hope spoke about various episodes in his life. Huub is so happy he’s a hundred years old and contented with Dr. Peguinlan.

Hubertus Cornelis (Huub) van der Heiden was born on April 5, 1921 in The Hague in the Transvaalquartier. He was the youngest of four children, a sister and two brothers.

After school, Hope went to work at the travel agency Lisoni Lindman. When the war broke out, he had to look for another job and enroll in the Central Bureau of Statistics, where he worked until the age of 63. (1984)

In the 1950s, Hope became acquainted with his wife Lenny (1933), his wife who is twenty years younger than Klewig. She worked for ANWB until her retirement. They moved to a top floor apartment in Bezuidenhout. In the 1990s, they were on the Dr. Beguinlaan to live. They have traveled a lot together. Switzerland has been a very favorite destination, but it has also been a long travel destination, like Israel. Hope says he’s been on a plane 22 times.

A few months after her retirement, his wife was experiencing some tensions which made her unable to live at home. Stayed at Sonnenburgh and Het Anker until her death in June 2014. Huub has always visited her with honesty and love.

Hope received his cousin Jericho and the neighbors when he got home from the rehab.

Early this year, Hope developed heart problems and was treated in hospital and subsequently recovered well in a rehab home. After 3 months of rehab in Huize Oostduin, he returned to his home in Dr. Peguinlan. The neighbors taught him when he got home. He is happy again to be at home, in his own environment with his famous neighbors, cousin and friends from Oude Kerk in Voorburg. 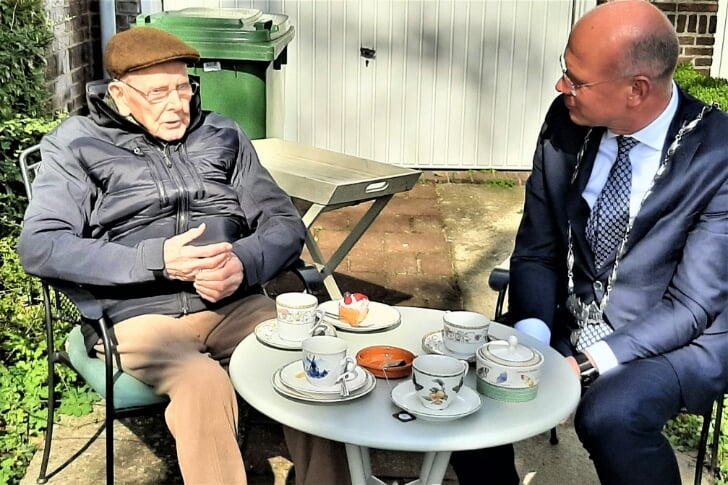 At the table with the mayor.

Read the full article at Het Krantje next week and then online here.