While there is no definite answer to this, traders and other stakeholders can use statistical data to forecast the price movement of Tesla. One of the most common and widely used indicators is the MACD.

The Moving Average Convergence / Divergence, known as MACD in stock trading, is a forex trading indicator showing the degree of divergence of two exponential moving averages (EMA). It is one of the most flexible and easiest indicators in the market, and it is not hard to see why it is a beloved indicator among traders.

MACD was invented by Gerald Appel in 1979. It shows the relationship between two moving averages of a stock’s price in the market. First, the MACD line is calculated by subtracting the security’s 26-day EMA from its 12-period EMA. Then, the signal line is plotted above the MACD line. This is the line that traders use to buy or sell the security.

For easier interpretation, the MACD is usually shown as a graphical representation or histogram, showing the distance between it and its signal line. When the MACD line is below or above the signal line, its histogram will be above or below the MACD baseline. Using this, a trader can tell whether the stock is experiencing a bullish or bearish momentum.

Traders use other interpretations when deciding to buy or sell a stock. This helps them avoid being faked out by giving them more time to confirm the position of the stock. The crossover is where a trader waits until the confirmation of a cross above or below the signal line.

As many grapple with whether Tesla’s stock will ever get back to its glorious $1200+ all-time high, traders can use Tesla’s trade view to track its prices and MACD. From the trade view, it is clear that Tesla’s moving average is currently still below its median and seems to have been on this trend in the past few months. 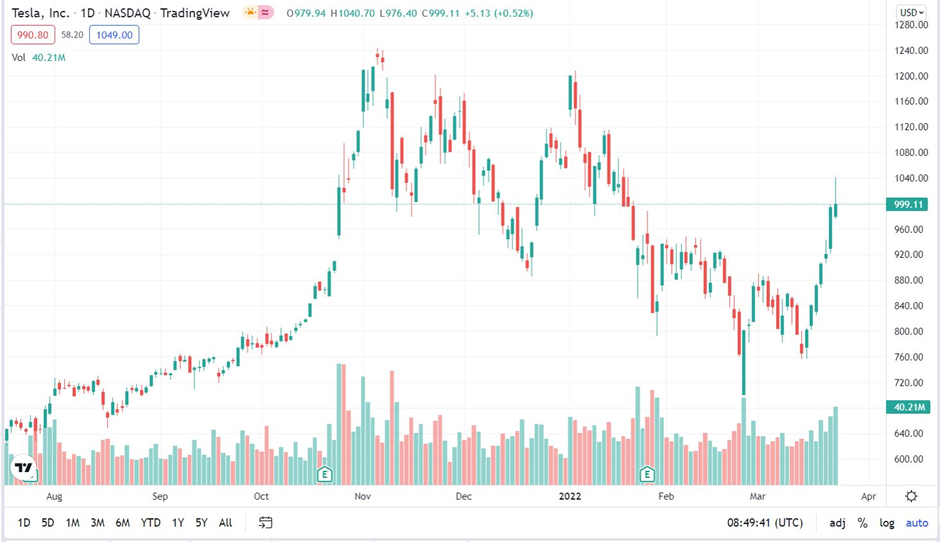 However, its RSI shows that the stock price is neither overbought nor oversold and is just in between. Therefore, it is neither a strong indication of whether to go short or long in the market. Using the RSI and the MACD, a trader dealing with Tesla’s stock can opt to hold their position and monitor its prices before making a move.

As a major electric car company globally, Tesla’s stock has become a great asset in many traders portfolio’s. However, its price movements have been volatile, hoping that it will get back to its recent all-time high of $1200+. Whether it does remains a speculative affair. Still, MACD can be a significant trend indicator for traders to know when to enter or exit the market. The price might not get back to its glory, but using the MACD, a trader can forecast whether they are making a loss or a profit by going long or short at any particular time in the market.