SpaceX was set for their ninth launch of operational Starlink satellites, along with two satellites for BlackSky’s Earth observation constellation, on Wednesday, July 8 (11:59am EDT / 15:59 UTC).  However, despite the weather forecast issued by the 45th Space Wing the day before launch showing a 60% chance of acceptable weather, the conditions deteriorated ahead of T-0 causing a scrub. An original back-up date of Friday, July 10, is now in question as SpaceX says they are working to set a new launch date.

This mission was previously scheduled for Friday, June 26, but the flight was scrubbed around three hours ahead of liftoff when SpaceX tweeted that they needed more time for pre-launch checkouts.

This will be the fourth launch in six weeks for SpaceX, and the eleventh SpaceX orbital launch this year.

This flight will use Falcon 9 booster 1051.5 (the fifth flight of serial number 1051). This well-traveled booster has flown from all three of SpaceX’s launch pads and will be attempting its fourth landing on the drone ship Of Course I Still Love You, as it did during flights of Demo-1 for NASA’s Commercial Crew Program, Starlink v1.0 L3, and Starlink v1.0 L6. It has also landed at LZ-4 on Vandenberg AFB after launching Canada’s RADARSAT Constellation Mission.

This will be the first flight with the full load of satellites having deployable sun visors to reduce reflections from the antennas.  It is hoped that this will make the satellites invisible to the naked eye when they are in their operational orbit, and reduce the brightness of the satellite streaks in astronomical observations.  The visors are designed to achieve those goals without causing additional heating of the satellites that can result from just making them darker. 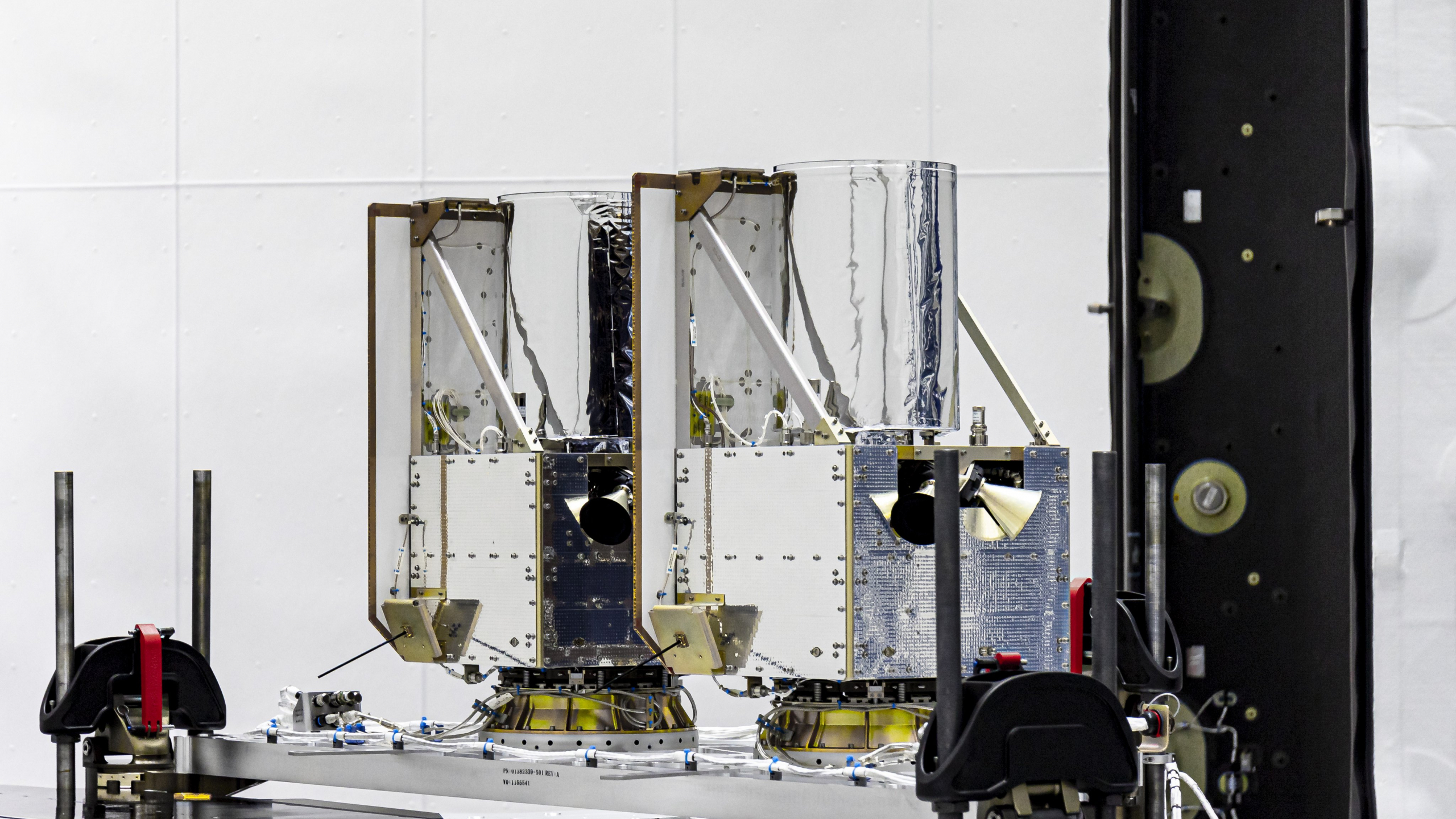 BlackSky, a division of Spaceflight Industries, is an earth observation company that combines data from multiple sources, including their own satellites, other satellite operators, and social media platforms to provide intelligence to their customers.  They are beginning an expansion of their constellation from four to sixteen satellites.

The fifth and sixth satellites in the BlackSky constellation, which each mass 55 kg, are the first satellites manufactured by LeoStella, a joint venture of Spaceflight Industries and Thales Alenia Space.  Four more BlackSky satellites are scheduled to launch on an Indian SSLV rocket later this year, and the company hopes to launch another six on various missions through early 2021.

Only two BlackSky satellites have been sent to SSO orbits that give a view of the entire globe.  The rest of the sixteen satellites are going to mid-inclination orbits that will allow more frequent observations of highly populated areas. The rideshare was arranged by Spaceflight Inc., a former division of Spaceflight Industries that was recently sold so that the company could focus on their BlackSky division.

This is the second of what is expected to be three consecutive rideshares on Starlink flights.  Planet launched three of their SkySats on the previous Starlink mission, and has three more manifested on the next mission that is expected to launch no earlier than late July.  The Starlink missions fill a niche in the rideshare market by providing frequent flights to mid-inclination orbits for passengers that can perform their own orbit raising from the low Starlink deployment orbits.  While recent Starlink missions have deployed to an altitude of approximately 200 x 380 km, pre-mission launch data on CelesTrak shows this mission is targeting a higher deployment orbit around 388 x 401 km.  The increase in altitude might make it easier for the BlackSky satellites to reach their operational orbits.

SpaceX has also booked many customers for upcoming dedicated rideshare flights to Sun Synchronous Orbit, which will deploy at higher altitudes.

More than 100 spacecraft have been signed up to fly on Falcon 9 since we launched the rideshare program. Small satellite operators can book their ride to orbit online → https://t.co/hyMYK3v29p https://t.co/HYGfD333ix

SpaceX board member Steve Jurvetson recently tweeted that the company’s board had an opportunity to try out the user terminals at the company headquarters in Hawthorne.  The devices appear to use a Power over Ethernet (PoE) cable for their power and data connection. 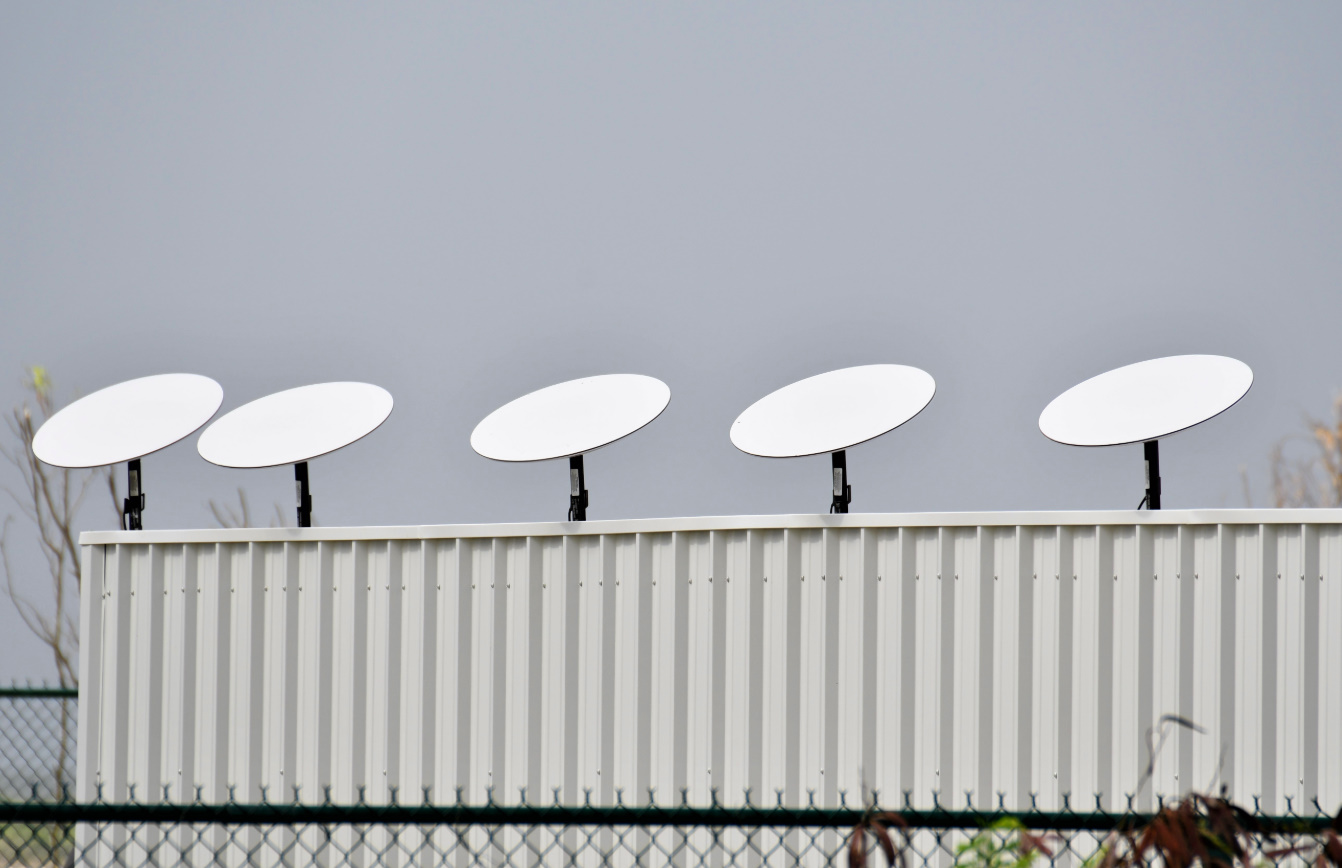 SpaceX continues to make progress setting up its network of gateways for the Starlink system. Five new gateways are being added in the Northwest and North Central U.S. with locations in Northern California, Idaho, Minnesota, Montana, and Washington. In the Southeastern U.S., previously filed gateways in Tennessee and Florida were removed while new locations were added in Georgia and Alabama. In the Southwest a location was added in Arizona. This brings the number of U.S. Ka-band gateway locations to 32.

See also  How To Photograph Comet NEOWISE, Our Most Spectacular Comet For 23 Years

Prior to the v1.0 L9 launch, SpaceX has launched 478 of the version 1.0 Starlink satellites towards the initial deployment of approximately 1500 satellites.  A few of those have had issues after launch, with five being deorbited already and a few more currently lowering their orbits.  It seems that about 460 of the 478 previously launch satellites are operational.

The following animation shows Starlink satellites spreading out after launch since the beginning of 2020.  Each launch has split its approximately 60 satellites into three orbital planes, which drift apart from each other in a lower parking orbit before the satellites are raised to their operational altitude of 550km.  Once reaching the correct altitude the satellites in each plane spread out to evenly circle the globe.

Animation by Ben Craddock for NASASpaceflight of Starlink satellites filling their orbital planes since the beginning of 2020.

The Falcon 9 rocket with its payload attached was lifted to the vertical position at LC-39A late in the morning on Wednesday, June 24, in preparation for its static fire test.  The test was performed that evening at 6:30pm EDT.

The launch countdown will officially commence at the T-38 minute mark on Thursday afternoon when the launch director will poll the mission teams to proceed into propellant loading operations. When the “go” is given, chilled RP-1 fuel will flow into both stages of the Falcon 9 launch vehicle at 35 minutes to liftoff, along with liquid oxygen (LOX) loading into the first stage. LOX loading onto Falcon 9’s second stage starts at T-16 minutes.

At T-7 minutes prior to liftoff, the liquid oxygen pre-valves on the nine Merlin-1D first stage engines open, allowing LOX to flow through the engine plumbing and condition the turbopumps for ignition. This process is known as “engine chilling”, and is used to prevent thermal shock that could damage the motors upon startup.

A Falcon 9 is going vertical at LC-39A. High chance of static fire later today as this would be the normal cadence if one were to happen. We’ll keep eyes on the coast for updates on the 10th batch of Starlink satellites awaiting launch tomorrow. #Starlink #SpaceX pic.twitter.com/rAvo3QlSzP

At the T-1 minute mark, the Falcon 9’s onboard flight computers run through final checks of the vehicle’s systems and finalize tank pressurization before flight. The launch director gives a final “go” for launch at T-45 seconds.

The nine Merlin-1D engines on the first stage ignite at T-3 seconds, with liftoff taking place at T-0 following a quick final check by the onboard computers to verify that all systems are operating nominally.

After lifting off from LC-39A, the Falcon 9 pitches downrange as it accelerates towards orbital velocity. At around a minute and 12 seconds into the flight, the vehicle passes through the region of maximum aerodynamic pressure, or “Max-Q”. During this portion of flight, the mechanical stresses on the rocket and payload are at their highest.

The nine Merlin-1D engines on Falcon 9’s first stage continue to burn until around T+2 minutes and 33 seconds, at which point they shut down in an event known as MECO, or Main Engine Cutoff. Stage separation occurs shortly afterward, with second stage Merlin Vacuum engine ignition taking place at the T+2 minute 43 second mark. Upon engine startup, the second stage will continue to carry all 60 satellites to a low Earth orbit, with an inclination of 53 degrees.

The 5-meter payload fairing housing the payloads during the initial phases of launch separates at approximately 3 minutes and 24 seconds into the flight. Both halves of the fairing descend back to Earth to be recovered by GO Ms. Tree and GO Ms. Chief, SpaceX’s fairing recovery vessel duo. The fairing recovery ships did not have their large catch nets in place when they left port. SpaceX may be planning to just scoop the fairing halves out of the water as they have on several recent missions.

While Falcon 9’s second stage and the payloads continue to press onward to orbit, Falcon core B1051.5 will return to Earth to conduct a propulsive landing on the droneship “Of Course I Still Love You”, stationed approximately 630 kilometers (391.4 miles) downrange from the launch site.

The first stage will perform an entry burn which ends at 6 minutes and 40 seconds into the flight, in order to slow its descent and refine its trajectory to the droneship. The final landing burn will take place shortly around the 8 minute mark, with B1051.5 touching down softly on the deck of OCISLY under the power from a single Merlin-1D engine 8 minutes and 24 seconds after liftoff.

The Merlin Vacuum engine on Falcon 9’s second stage will shut down for the first time at 8 minutes and 51 seconds into the flight in an event known as SECO-1, or Second Engine Cutoff.  After coasting for almost 40 minutes, the second stage will relight at the T+47 minute 18 second mark for a three second burn to raise the perigee into a more circular orbit.

After deploying all of the payloads, the second stage is expected to light its engine one more time for a deorbit burn, splashing down in the ocean west or south of Australia on its second orbit.