Newspaper headlines: ‘End of the Rhodes’ as fears grow over shut schools 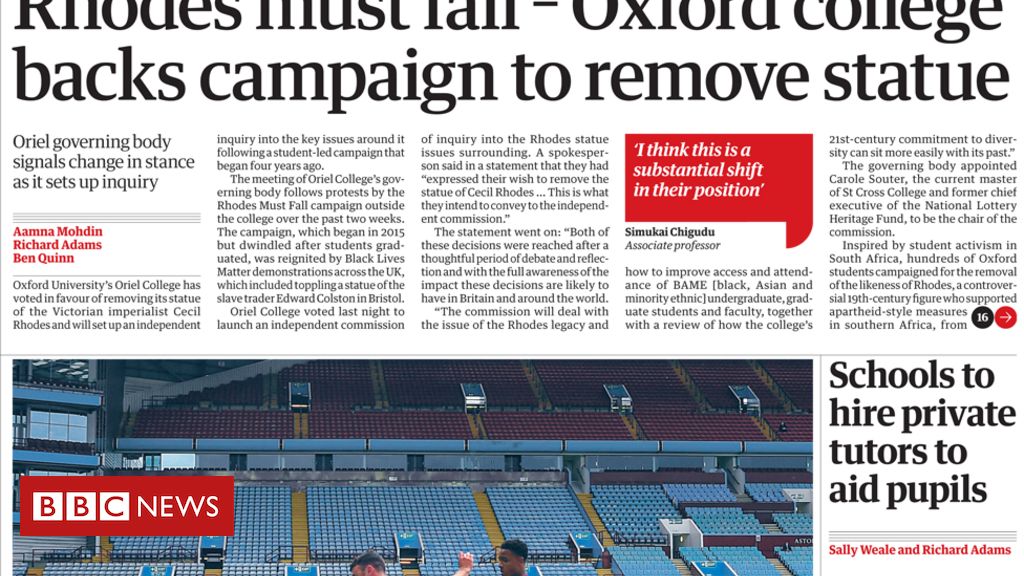 There’s a stark warning from Prince Charles on the front of the Daily Telegraph about the potential impact of the coronavirus crisis on young people.

The paper has seen a message he sent to the Prince’s Trust, in which he speaks of fears that widespread youth unemployment will cause a “terrible downward spiral”, leading to “poverty, homelessness or worse”. The Prince also suggests that the problems facing children now are more serious than when he set up the Trust in 1976 – shortly before the Winter of Discontent.

According to the Guardian, ministers are preparing to announce a year-long programme aimed at helping youngsters in England catch up on lost learning. Under the plans, schools would receive extra funding to hire private tutors who will deliver face-to-face and online classes for pupils behind on their studies after months outside the classroom. But the proposals are questioned by the joint head of the National Education Union, Mary Bousted, who asks how easy it will be to scale them up.

The Sun reports on an apparent dispute between German and Portuguese police and the re-testing of DNA evidence in the hunt for Madeleine McCann. The paper says German detectives want to re-examine saliva found on a piece of cloth on the missing girl’s bedspread – to try to prove a link to the main suspect, Christian B. But officers in Portugal believe it may be illegal to send the sample overseas for further testing, insisting that it has “little identification value” anyway. A former Scotland Yard detective, Peter Bleksley, urges the two countries to stop “muscle flexing” – and avoid an “undignified bun fight”.

“PM’s Million Pound Paint Job” is how the Metro describes Prime Minister Boris Johnson’s decision to spend public money making over his official jet in the colours of the Union Flag.

The Daily Mirror calls it “plane stupid” when other issues should be “at the top of the prime minister’s in-tray”.

Writing on the Huffpost UK website, Maighna Nanu thinks the project is “bizarre” – when one day earlier, the government had to be persuaded by a footballer into “wanting to feed hungry children”.

But an RAF source tells the Daily Mail that the plane’s new colour scheme will be a useful way of waving the British flag abroad. “It will be diplomatic and appropriate”, the source says – “I imagine it will be in great demand”.

“Football returns with a respectful salute,” is the headline in the Daily Express, while the Times calls it an “extraordinary anti-racism gesture”.

For the i newspaper, the games themselves were a strange spectacle. “It was all a bit different, a bit weird”, writes Sam Cunningham, “the socially-distanced pre-match interviews, the big square wall displaying videos of supporters watching from home”.

But Matt Dickinson in The Times is just grateful that football is back. “It was like those 100 days without our national sport had never happened,” he says, “as we found ourselves looking at slow-mo replays and screenshots, exclaiming: ‘How did they miss that?'”

A number of the front pages cover the announcement that Oriel College in Oxford has voted to remove its statue of the imperialist Cecil Rhodes. Writing on the New Statesman website, the academic Richard J Evans says the move is “long overdue” yet purely symbolic until the “real issues of racial discrimination in our society have been addressed”.

The president of Oriel College’s student common room also welcomes the news but tells the university paper, Cherwell, there will have to be “continued engagement” until the sculpture finally comes down.

The Times reports that former Conservative MEP and long-time Oriel College sponsor Daniel Hannan has cancelled his regular donation in protest at the decision. In an opinion piece for the paper, Joanna Williams is equally unimpressed. “The word ‘trauma’ does a lot of work in universities today,” she claims. “It is perilous to challenge this narrative of emotional breakdown”.

Sign up for a morning briefing direct to your inbox

American news websites are dominated by analysis of claims made by President Donald Trump’s former national security adviser, John Bolton, in his new book. The Hill says its portrayal of the President as “out of his depth and incompetent” may do him more political harm in November’s election than fresh allegations of serious wrongdoing.

But the New York Times suggests Mr Bolton may be the “last person many Americans wish to hear from right now”, given he refused to testify at Mr Trump’s impeachment hearings. The Washington Post agrees, arguing that Mr Bolton has – in effect – indicted himself for not speaking out sooner.

Back in the UK, the Daily Mail leads on work being undertaken by public health officials to see whether low levels of Vitamin D could heighten the risk of serious complications from coronavirus.

The paper says the medicines watchdog, NICE, is conducting a “rapid evidence review”, amid concerns that months of indoor living may have made the situation worse for people who already had too little of the so-called “sunshine” nutrient in their bodies. It’s understood the report could be published as early as next week.

Renewed concerns about the fate of Britain’s theatre industry are highlighted by the Guardian. It’s seen an open letter to the government – signed by almost 100 actors, writers and directors including James McAvoy and Phoebe Waller-Bridge – warning that the sector faces ruin without urgent financial support. The letter calls on ministers to set up an emergency relief fund and a cultural investment scheme, through which the state would put money into productions and take a cut of the profits.

And there are warm tributes to the snooker legend Willie Thorne, who died yesterday at the age of 66. The Daily Telegraph describes him as a “hugely likeable” figure who became one of the biggest stars of the sport’s golden age in the 1980s.

The Sun thinks it’s irrelevant that Thorne failed to win the big tournaments, as he charmed his way into the nation’s affections with his enduring good nature and distinctive appearance. “Beneath that crested dome and Max Wall haircut”, writes Mike Walters in the Daily Mirror, “he wore his Groucho Marx moustache like a crown”.