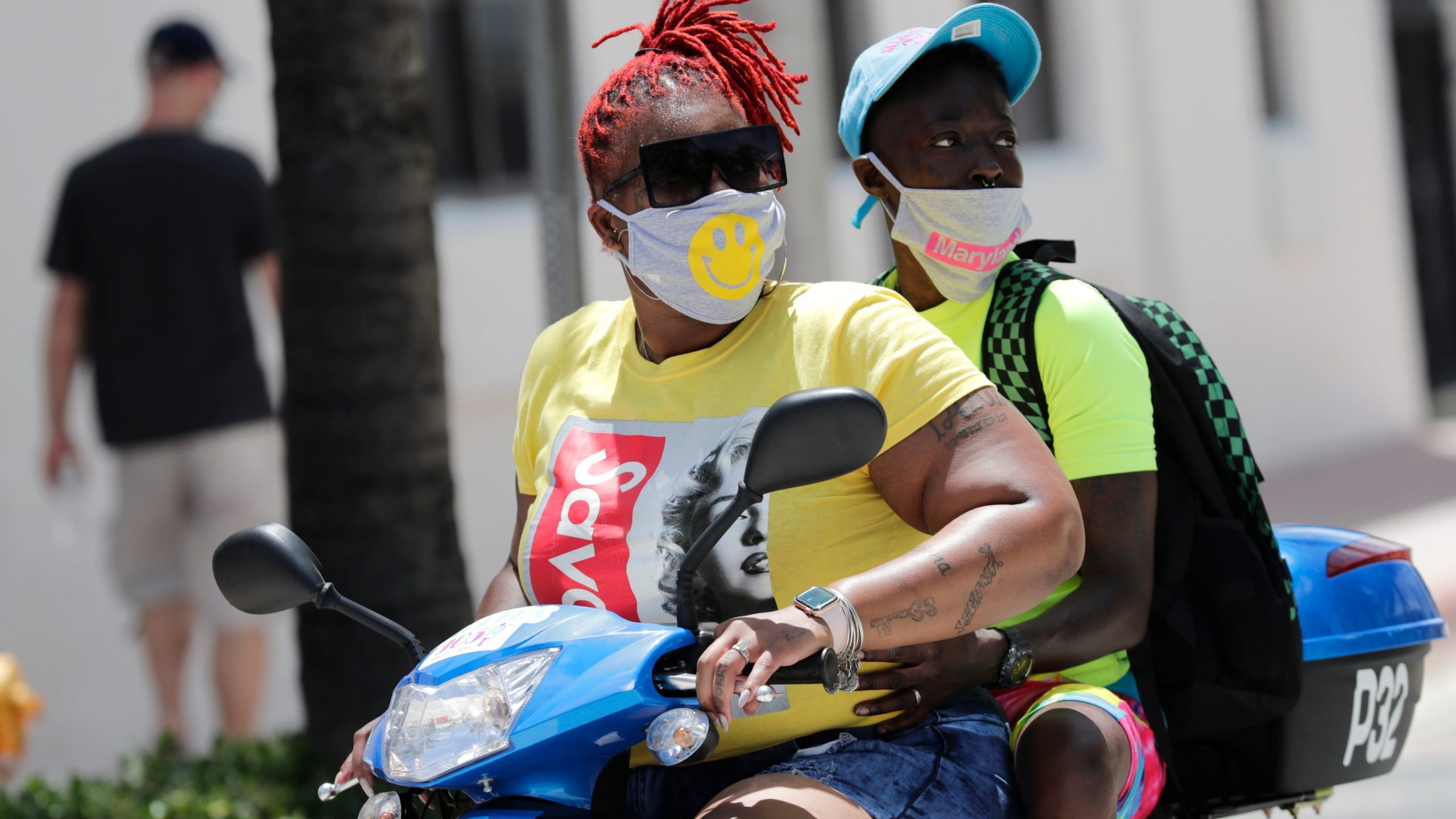 According to a Pew Research Center report, discrimination and racism have increased in the wake of the coronavirus outbreak, particularly for Asians.

As the pandemic reached new highs in Florida and across the world, New York City provided a glimmer of hope: zero deaths for the first time in four months.

In France, the wife of a bus driver who was beaten to death after he asked four passengers to wear face masks aboard his vehicle called Saturday for “exemplary punishment” for his killers. The bus driver had been hospitalized in critical condition after the July 5 attack, and his death was announced Friday.

📰 What we’re reading: Public health experts fear a scenario where “me first” vaccine nationalism pits nation against nation to get and keep enough doses for their citizens. Countries, as of now, are focusing on their own vaccine development programs rather than collaborating to pool resources.

President Donald Trump retweeted a post claiming the Centers for Disease Control and Prevention and others are telling “outrageous lies” about the pandemic. The original tweet, from conservative podcast host Chuck Woolery, claims the lies are politically motivated and designed to keep the economy from reviving.

“The most outrageous lies are the ones about Covid 19. Everyone is lying,” Woolery, a former game show host, wrote. “The CDC, Media, Democrats, our Doctors, not all but most, that we are told to trust. I think it’s all about the election and keeping the economy from coming back, which is about the election. I’m sick of it.”

As officials play political football with K-12 school re-openings, families across the nation are busy making their own calculations about whether to send children back to school. Most are taking a measured and hyper-local approach to what is ultimately a very personal decision, consulting with friends, neighbors and local educators. That’s despite the issue becoming increasingly political, with President Donald Trump and state officials weighing in last week, often in conflict with published health guidance.

“There are no ideal solutions here,” says Kao-Ping Chua, assistant professor of pediatrics at the University of Michigan. “Unfortunately, beyond conflicting information that’s getting politicized, states are seeing surging cases, which is not an environment you want to open schools in.”

Evidence is emerging that people can become infected a second time, a scenario that could be the death knell to any faint hopes of “herd immunity.” D. Clay Ackerly, a primary care physician practicing in Washington, DC., writes for vox.com about a 50-year-old patient who earlier this month tested positive for SARS-CoV-2, the virus that causes Covid-19, three months after a previous infection. His first infection prompted mild symptoms, the second “was marked by a high fever, shortness of breath, and hypoxia, resulting in multiple trips to the hospital,” Ackerly said. He also cites other examples of second infections.

Initial data released Sunday by the New York City Department of Health and Mental Hygiene reported that no one died from the virus in the city on July 11, exactly four months after the state’s first official death was recorded on March 11. Officials also recorded no confirmed deaths the day before as well, but did report two probable deaths.

The welcoming news comes after a harrowing four-month stretch in the nation’s most populated city. The peak in confirmed daily deaths was April 7, with at 597, although another 216 people were likely to have died from the virus that day despite no positive laboratory tests. All told, New York City has reported 18,670 deaths from COVID-19 and 4,613 probable fatalities.

The Oklahoma State Department of Health reported Oklahoma’s first COVID-19-related death in the 5-17 age category. The patient was identified as a 13-year-old who died at Comanche County Memorial Hospital on Friday night, reported local news station KSWO-TV. Oklahoma military base Fort Sill said the teen was a dependent of an active duty service member at the post, where family members are in isolation.

The state department reported 456 new coronavirus cases across the state Sunday, bringing the total cumulative number of the state’s positive cases to 20,235.

Mexican officials say the total number of confirmed COVID-19 deaths has passed 35,000, moving it past Italy with the fourth-most deaths of any country in the world. Only the United States, Brazil and Britain have recorded more deaths, according to the Johns Hopkins University data dashboard. Mexican President Andrés Manuel López Obrador said the recent news “is positive, it is good” because only nine of the country’s 32 provinces had increases in cases of infection.

“The bottom line is that the pandemic is on the downside, that it is losing intensity,” he said.

Meanwhile, Italy, which was one of the first hot spots of the virus in Europe, has seen hospitals declare themselves coronavirus-free. The country’s deaths Saturday fell to 7, with confirmed daily cases dropping to below 200, according to health officials.

Veronique Monguillot said she told the French interior minister, Gerald Darmanin, that she was “destroyed” by the fatal assault on her husband at a bus stop in Bayonne, southwest France. “We must bang a fist on the table, so this never happens again,” she said. “It’s barbaric, not normal. We must stop this massacre.”

Bus driver Philippe Monguillot was attacked July 5 after asking four passengers to wear face masks, which are required on French public transport. Monguillot was then verbally assaulted, pushed off the bus and violently beaten and kicked in the head. His death was announced July 10 after he had been hospitalized in critical condition. Four men have been arrested and charged in connection with the fatal assault.

Florida tops record for new cases by any state as school, convention looms

Florida on Sunday reported the largest single-day increase in positive coronavirus cases in any state since the beginning of the pandemic. The 15,299 additional cases represents almost 3,700 more than any state had reported in a single day. Last week was Florida’s deadliest: almost 500 fatalities. Two months ago, Florida was one of the first states to begin reopening its economy. One month ago, fewer than 5% of tests came up positive on a daily average. Last week, the daily average exceeded 19%.

Coming next month is the new school year, which in many parts of Florida begins Aug. 10. Gov. Ron DeSantis has cited the “huge, huge costs” of not providing in-person schooling, ordering schools to offer five-day-per-week, in-classroom education.

“The risk of corona, fortunately, for students is incredibly low,” he said.

Also next month, the Republican National Convention is scheduled for Jacksonville. The GOP is considering moving the convention to an outdoor stadium, The Washington Post reported last week.

America’s testing system is once again strained and labs are struggling to keep pace as coronavirus rages faster than ever in the South and West.

The number of daily tests reached an all-time high of more than 719,000 on July 3 and averaged nearly 640,000 each day this past week, according to data from the COVID Tracking Project.

Because of this increase, large and small labs running 24/7 can’t process samples quickly enough from millions of Americans tested every week.

Testing centers in Sunbelt cities such as Tallahassee, Florida, and Phoenix routinely attract long lines and at times must turn away people. Other than hospital patients, whom labs are prioritizing, delays are widespread in the South and West at drive-thru and walk-up testing centers, urgent care, doctor’s offices and government-supported testing sites.

More on the coronavirus from USA TODAY

Where a face mask is required: Many governors are instituting or renewing orders requiring people to wear face coverings in public as cases continue to rise. Is your state on the list? See it here.

Coronavirus Watch: We have a few ways for you to stay informed. Sign up for our daily coronavirus newsletter here, and come together and share the latest information about the coronavirus, coping with lifestyle changes and more by joining our Facebook group.

Where are states on reopening? Some are taking preemptive measures to postpone further phases of their reopening, while others have rolled back their phases to prevent the spread of the coronavirus. See the list.