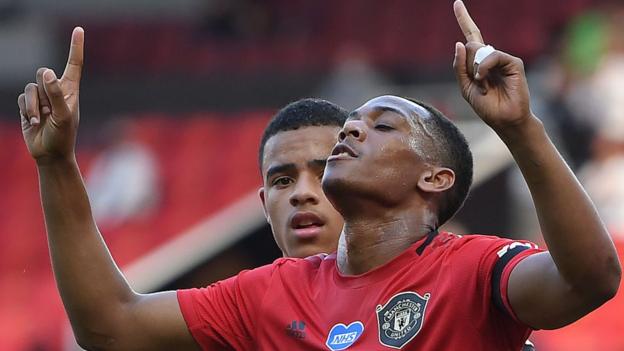 Robin van Persie was the last United player to score a treble in the league.

And while there was nothing to compare with the Dutchman’s brilliant volley against Aston Villa that helped seal the 13th and final title of Sir Alex Ferguson’s illustrious reign, Martial did complete his own milestone with a delightful chipped finish over Simon Moore after collecting Marcus Rashford’s return pass.

The result moves United to within two points of fourth-placed Chelsea, who entertain Manchester City on Thursday.

However, for Chris Wilder’s visitors it was another disappointing day. The Blades have now picked up just one point from three games since the resumption and are yet to score.

United’s decision to sell Romelu Lukaku and Alexis Sanchez to Inter Milan in August and not buy an attacking replacement has been a talking point for most of the season.

And for most of the campaign, it looked like a poor move.

But, just as United’s fortunes have changed markedly since the arrival of Bruno Fernandes in January, so Martial has profited too.

He now has 19 for the campaign – his best return in five years at Old Trafford. And while he has a bit to do before he matches Lukaku’s 27 goals from two seasons ago, it is three more than the Belgian managed last term.

Even more satisfying for Solskjaer, the Frenchman’s first-half strikes were exactly the kinds of goals he has been imploring him to score.

Both were runs to the near post, the first took him a bit nearer to the goal than the second. But on each occasion, Martial found the net with a clinical first-time finish to convert low crosses from first Rashford and then Aaron Wan-Bissaka.

“I am very happy for Anthony,” said Solskjaer. “We have worked with him getting in the box. The first goal, I think that’s a vital goal with they way he turned and got himself into a position to score from Marcus’ cross.

“He’s getting into those positions more and more. He is in good form.”

Martial is not known for his smiling but even he managed one after scoring his third, his delight obvious after previously scoring twice in a game for United five times in five years without ever going on to complete his treble.

However, to put it into context, Manchester City striker Sergio Aguero has scored 11 hat-tricks in the same time United have managed two.

The Pogba and Fernandes axis

It was the first time Paul Pogba and Fernandes had started a game together and there were signs the pair could be a potent midfield combination.

Pogba operated in a slightly deeper role, closer to holding midfielder Nemanja Matic but evidently with licence to go forward.

Had Rashford not fluffed his first-time volley as he latched on to a brilliant chipped pass from Pogba at the end of a move Fernandes did much to influence, it would have ended a superb passage of play.

“Paul and Bruno showed quality and it’s exciting for us to be working with talent like this,” added Solskjaer.

“Paul is still a bit away from his best form. That’s natural on his first start since September and he’s been working hard, so hopefully it won’t be too long, but I thought he controlled the game.”

With Matic as well, there was a synergy about the home side in the middle of the field that, in the second half in particular, the visitors found it difficult to contain, judging by the rather blunt messages being delivered by the Blades’ players.

Pogba was mesmeric at times. One run through the visitors’ defence involved close control with both feet, balance on both sides and delightful close control. The pity was Martial stepped in to take the shot – which he missed – rather than let his fellow Frenchman try to find his own way to goal.

It has not been a great restart for the Blades. One point and no goals from three games in a week has ended the optimistic talk about a Champions League place.

The loss of goalkeeper Dean Henderson – not allowed to play against his parent club – John Egan through suspension and Jack O’Connell to injury meant there was reduced chance of the visiting United recording a first Old Trafford success since April 1973.

However, they looked tired at the end and need to pick themselves up quickly if they are to secure a top-half finish, which would be their first in the top flight since 1974-75.

Man of the match – Anthony Martial

‘We want third’ – what they said

Manchester United manager Ole Gunnar Solskjaer said: “I’ve never said fourth is our aim, we want to go up to third but we have to focus on each game as it comes and there’s two cups for us there as well. In the end, we can count the points and maybe have only two teams in front of you.”

Sheffield United boss Chris Wilder said: “I expect a better performance from my team. I don’t want people looking at our defensive record and saying ‘how have they done that?’ To concede after three or four minutes put us on back foot.

“If you give the ball away to players like that you are going to get hurt. Lot to look at from our point of view. Easy night for them.”

Blades continue to struggle in front of goal – the stats

Manchester United’s next game is at Norwich in the FA Cup sixth round on Saturday, 27 June (17:30 BST). Sheffield United entertain Arsenal at Bramall Lane the following day (13:00).