Abu Dhabi’s Yas Marina Circuit hosted the Gulf 12 Hour Final, the season finale of the Pirelli-powered Intercontinental GT Challenge, on Sunday. Mercedes from GruppeM Racing looked like the big favourites, but they came out in the early stages and the best Audi in the field, the R8 LMS Evo II from Tresor Attempto Racing, didn’t see the black and white pattern. Ferraris took advantage of that to score a 1-2 finish with AF Corse. James Calado, Antonio Fuoco and Alessandro Pier Guidi beat Niklas Nielsen, Davide Regon and Alessio Rovira. GruppeM driver Danny Juncadella was able to win the Drivers’ Championship. Mercedes-AMG won the single-make championship for the first time.

GruppeM teammates Maro Engel and Raffaele Marciello started on the front row. After the opening round, they came straight away to complete one of the ten mandatory pit stops, as did Kelvin van der Linde (Audi Sport Tresor Team) who started the race from P3. So alternative strategies were immediately considered. Luca Stolz (Al Manar Racing by GetSpeed), who only had a chance at the championship if he won the race, also came up early. However, within forty minutes, water was sprayed from Engel’s car into the braking areas and he would fail with water pressure problems. Marcello’s car would meet the same fate an hour later.

See also  Why does exercise before menstruation sometimes feel so heavy? 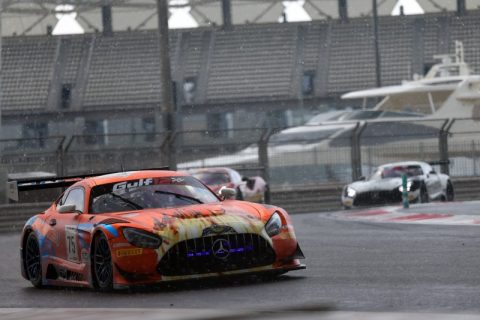 Ellis, Habul, and Konrad battled the rain on their way to first place in the Pro-Am class

Halfway through the race it was clear that the battle for victory would be between the Ferrari of AF Corse, the Mercedes-AMG of Al Manar Racing by GetSpeed ​​and the Audis of Tresor Attempto Racing and Saintéloc Racing. Three hours from the end, Van der Linde was pushing his teammate Dennis Marshall hard to catch up with Pierre Guede and Christoph Haas (Audi Sport Santeluc Team), but the German made contact with GT Cup leader Ivan Jacoma (Centre Porsche Tesino). He retired with a broken suspension. The Silver Cup was dominated by Team Santeluc Jr.’s Audi team, but Gilles Magnus had to retire with mechanical problems in the last hour and a half. Fuoco led one last clear stint and won with Calado and Pier Guidi. It was 1-2 for AF Corse as Stolz again fell off the podium due to a slow final pit stop. Nielsen managed to get rid of Haas teammate Patrick Niederhauser and finished second with Rijon and Rovira. Haase and Niederhauser shared third place with GT3 newcomer Erwan Bastard. Stolz finished fourth with Fabian Schiller and Al-Faisal Al-Zubair. 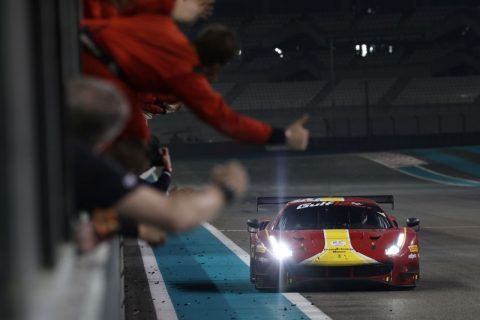 Philip Ellis, Kenny Habul and Martin Konrad (SunEnergy1 by SPS) won the Pro-Am class by finishing a brilliant fifth. They beat the McLarens of Garage 59 with Benji Goethe, Marvin Kirchhöfer and Alexander West ahead of Eddie Cheever III, Chris Froggatt, Jonathan Hui and Kevin Tse. In between, seventh was the MDK Motorsports Ferrari driven by Mark Kvamme, father and son Jan and Kevin Magnussen. Alex Aka, Pietro Delli Guanti and Finlay Hutchison (Tresor Attempto Racing) lost several laps due to gearbox problems, but were victorious in the Silver Cup after Simon Gachet, Lucas Légeret and Magnus failed. When Essa Al Khalifa and Martin Codrich arrived in Abu Dhabi as the winners of the Gulf 12 Hours, they rounded out the top 10 alongside Hunter Abbott in a 2 Seas Motorsport Mercedes-AMG. 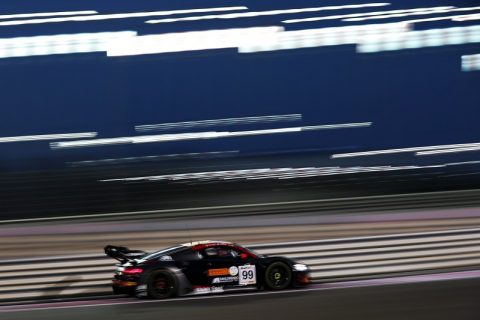 The Silver Cup win came as a surprise to Aka, Dele Juante and Hutchison

AF Corse took the full podium in the amateur rider category. Louis Bret and Philippe Bret took the Am class victory alongside Konrad Grunwald and Jean-Claude Saade ahead of teammates Stefano Costantini, ‘Alex Fuchs’, Laurent de Meus, Jamie Stanley, Alessandro Cozzi, Tane Hanna, Gabriele Lansere and Giorgio Sernagiotto. The Cox family finished an impressive fifth in class. Peter and Stefan raced a Saalocin Racing Porsche with Tom Boonen and Nico Pronk. Boonen nearly rolled on the last stage after being tapped by Grunewald at the fast third corner. In the early stages, it rained out of nowhere. Matthys-Vuboh sustained damage, which soon led to the loss of chances for the Baron Motorsport ME team. David Fairbrother in Duel Racing by Toro Verde Porsche Cup also crashed heavily on the wet track. He was hit in the shoulder. Despite making contact with Marshall and a puncture in the final three minutes, Alex Fontana, Jakoma and Ashish Patel won the GT Cup class. 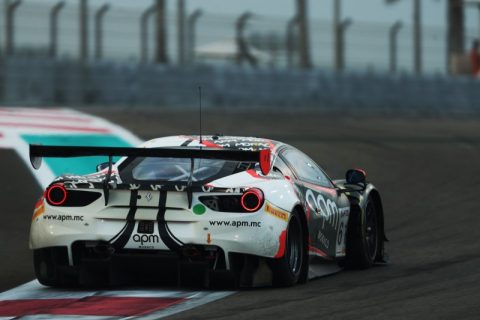 Grunewald, Prette Brette and Saada each led with three laps ahead of the rest of the Am competition

Juncadella’s lead up the standings was large enough that his title chances were only threatened if Stolz won the race. Since Stolz finished fourth, the Spaniard has become the drivers’ champion in the Pirelli-powered Intercontinental GT Challenge. After four titles for Audi Sport and two for Porsche, it’s finally Mercedes-AMG’s turn in the single-make championship. Hapol and Konrad are the winners of the Pro-Am Challenge.

Juncadela celebrates the drivers’ title with a turquoise-gold globe trophy

In 2023, the Intercontinental GT Championship will race on all continents for the first time since 2019: the Liqui-Moly Bathurst 12 Hour in Australia and the Joburg Kyalami 9 Hour in South Africa in February, the CrowdStrike 24 Hours of Spa in Belgium in the summer, and the Indianapolis 8 Hour Presented by AWS in the US in October and 12 Hour Bay in Abu Dhabi at a date to be determined.