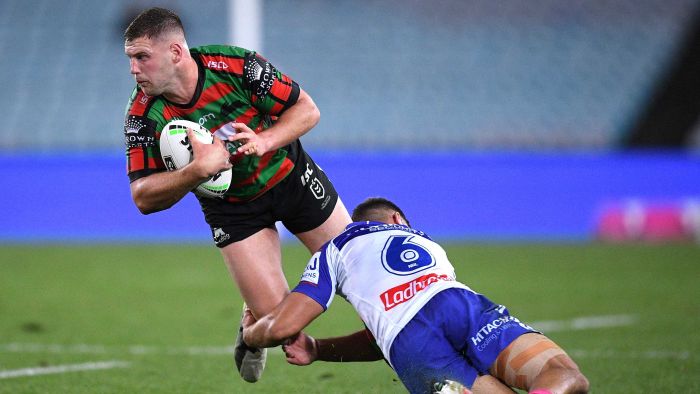 Canterbury rocked southern Sydney, heading to the Finals, with a dramatic 26-16 victory after a stunning referee mistake that threatened to derail the match.

Just two weeks after the World Cup Finals, the spotlight was on the referees after Rabbito got a chance in the first half despite Jackson’s touching Paolo’s right foot into the net before he fired the ball at Sydney’s Olympic Stadium.

Fortunately for Kline, the blown call did not cost the Bulldogs her third win of the season.

Kline awarded Paolo a try in the 33rd minute on the advice of Judge Phil Henderson, who erred despite standing in a perfect position.

The Bulldogs were leading 20-0 at the time, and despite two more leaks, they managed to withstand the Rabbitohs stunned.

They also won after mid-back Lachlan Lewis saved a high kick in the first half.

Rabbitohs Jaydn Su’a’s second rower can be set long on the sidelines for a high shot on Bulldogs Number Seven.

Lewis tumbled his feet and touched the ball, and replays showed Sawa held him in his jaw as the half slid to intervene.

Despite an emotional appeal from Rabbitohs captain Adam Reynolds, Su’a was sent to Sin-Bin and scored the bulldog soon after.

He will be anxiously awaiting the match review committee’s decision on Friday morning as Sawa missed Round 13 due to a serious contact charge.

For the sixth-placed club, who will face local rival Sydney Roosters next week, the loss could prove costly to their hopes of final home insurance.

They could drop a place to seventh on the ladder before the Final Round if this weekend’s results don’t go their way.

The eighth Cody Walker was the most dangerous on the rabbitw’s with two attempt passes, while Campbell Graham and Alex Johnston were occasional to try.

Reimis Smith, Chris Smith, Tim Lafai, and Raymond Faitala-Mariner all held the Bulldogs in a fit win for captain Josh Jackson in his 200th NRL match.

Although the Bulldog has moved from under the ladder, leaving Brisbane in the square seat to claim their first unwanted wooden spoon.