New Fenib The Dutch Transport Museum (NTM) has been the owner of the last Dutch TEE since November. The train has been sitting still for more than 10 years in an abandoned diversion yard at Amsterdam Central Station. As this site will be repaired, the museum wants to protect the symbol of luxury and progress from the 1950s and move it to Nieuw-Vennep in two steps. The museum set itself the goal of a complete restoration of a running train.

The first step of the transfer will take place on Thursday 19 and Friday 20 August. The train will leave Dijksgracht at a speed of about 20 km per hour. The train goes first to Watergraafsmeer and then via Amsterdam Central Station to stop on the other side of the station at the NS “Zaanstraat” workshop square. There the wagons are loaded onto trailers.

The second step will take place on Monday 23 and Tuesday 24 August. 5 wagons are then loaded onto huge trailers (the truck/trailer/wagon combination is about 40m in length!) and each one is brought from Amsterdam to NTM in Nieuw-Vennep.

The train is at the best of times. – private photo

Vision It was former NS director Dean Hollander who developed a vision in the 1950s that envisioned an international network that would connect 70 major European cities by rail: the Trans-European Express (TEE). In the 1950s, this train had to compete with another transport icon, the Fokker F-27 Friendship. In splendid luxury, 120 people had to be transported on a breathtaking journey across 5 countries; Holland, Belgium, France, Germany and Switzerland.

tee train The train was ahead of its time; It was designed by Elsebeth van Blerkom and built by Werkspoor (Railroad Wagon) and SIG (Luxury Wagons) in Switzerland. The train entered service in 1957 and until 1974 the train operated as a TEE train.

In 1977, the remaining trains/wagons were sold to Canada to be bought back in 1997 by a Swiss establishment that wanted to do nostalgic rides with them. However, this plan died beautifully and in 2006 the train was sold to the TEE Corporation, which transported the train to the Netherlands. Last November, ownership was transferred to NTM. The museum set itself the goal of a complete restoration of a running train.

To cover all costs, a fundraising campaign is now underway to fund the various stages. An action was launched through the fundraising program “GoFundMe”. The link is: www.gofundme.com/f/aankoop-teetrein-fase-1. There is also a TEE Facebook page (https://www.facebook.com/TEEtreinNTM)

Museum The Dutch Transport Museum in Nieuw-Vennep is open 6 days a week from 10am to 5pm (closed on Mondays). Tickets are for sale on our website or at the box office. NTM is located in Lucas Bolsstraat 7. 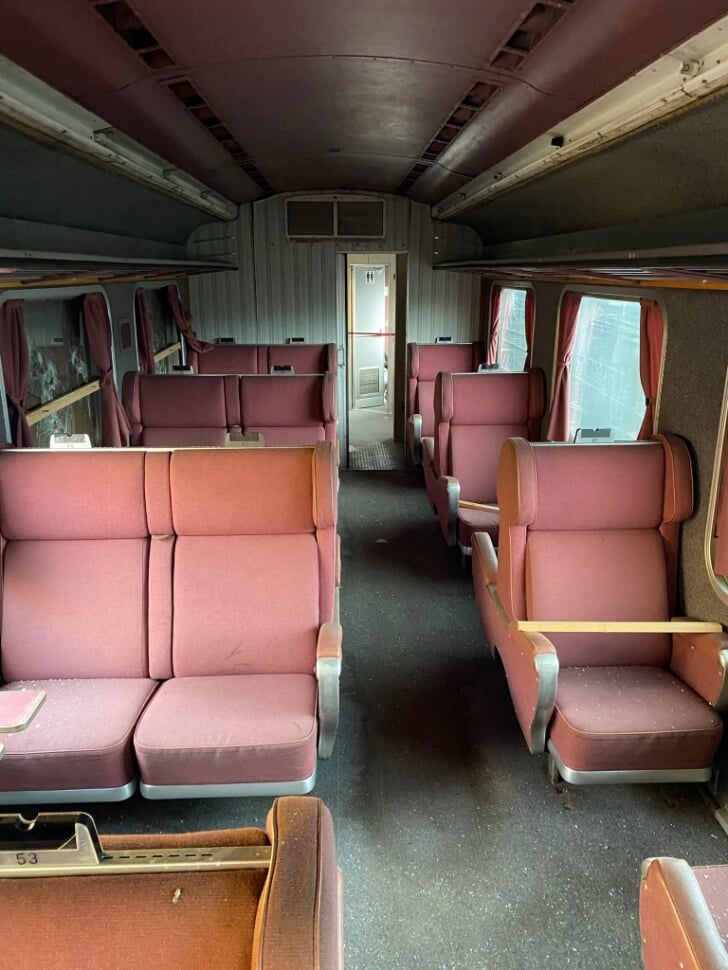 The interior of a TEE train. – private photo