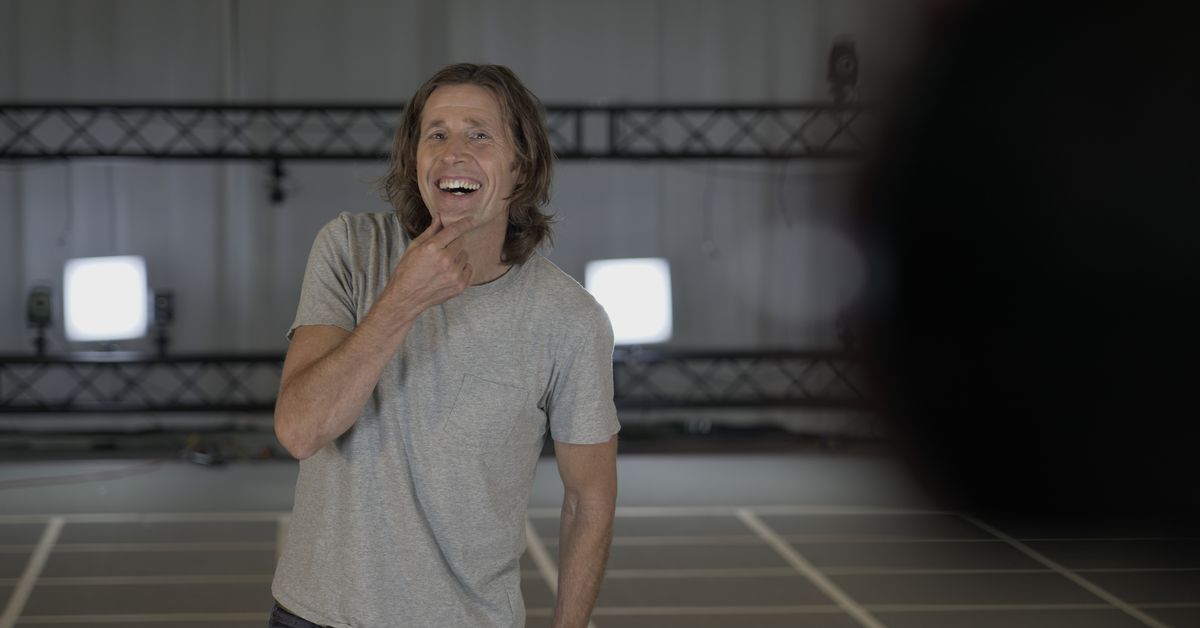 Rodney Mullen still remembers the first time he went on tour after appearing in a Tony Hawk’s Pro Skater game.

Mullen is widely regarded as one of the most influential skaters of all time, credited with creating many of the tricks — like the kickflip and 360 flip — that are now integral components of the sport. He turned pro when he was 13, and is now 53, which means he’s spent four decades perfecting his craft and elevating skateboarding. But nothing prepared him for what happened after he appeared in Tony Hawk’s Pro Skater 2.

“They had to put me on top of a van because it was so intense,” Mullen says. “It was a sea of people — around me. And although I had a strong name from all of those years prior, this was unlike anything I had ever seen. That was my first taste of it, and it just went on. I could not believe the exposure the game gave to me.”

THPS wasn’t the first skateboarding video game, but it was the most important. It wasn’t just a digital take on the sport’ it was also a window into a burgeoning subculture. It was over-the-top in places, but it was largely a faithful take on skateboarding — and not just because it accurately re-created the complex world of tricks. It also paid tribute to the skaters themselves like no game before it, while making fashion and music an integral part. In September, two decades after the series debuted, the first two games will be remastered, bringing the experience to a whole new audience.

“It’s a bit of a time capsule,” says Mullen. “The essence of what makes skateboarding special is still the same as depicted in the game.”

“I could definitely see that we were on to something.”

The first THPS debuted in 1999 on the PlayStation and was developed by a then largely unknown (and since shuttered) studio called Neversoft. It felt like an instant smash hit; it went on to sell millions of copies and was ported to the Nintendo 64 and Dreamcast a year later. It’s unlikely that anyone working on the game imagined it becoming the pop culture phenomenon it turned out to be. But for the skaters involved, it was an exciting opportunity from the very beginning.

”I just remember initially it sounding surreal to me, especially then, that skateboarding was going to be in a video game that would be available on consoles across the world,” says skater Chad Muska. “It was just a crazy idea. I remember thinking, ‘Let’s go. Let’s do this.’” For Bucky Lasek, it didn’t take long before he realized the project was turning into something special. “I can’t say I imagined it blowing up as big as it did,” he says. “But I could definitely see that we were on to something. If it’s something that I’m stoked on, I would imagine other people would be stoked, too.”

Muska believes that one of the key factors behind the game’s success was timing. In the early 1990s, skateboarding was largely dying, with even the biggest names struggling to get by. That changed later in the decade, thanks in large part to the X Games. The extreme sports showcase kicked off in 1994, was broadcast on ESPN, and created a mainstream appetite for skateboarding. Five years later, Tony Hawk landed a mythical 900 — a trick that involves spinning around two and a half times — during the X Games after 10 failed attempts. The stage was set for THPS. “Along comes this video game that brings that underground culture of the streets into the households of every person in the world, pretty much, who had a video game console,” says Muska. “Overnight, it was a household name. I was a household name. And everybody else in that game became household names because of that.”

Mullen has a slightly different perspective. Despite being one of the most influential people in skateboarding history, he didn’t feature in the first game. But Mullen and Hawk have a long history together. The two skated together as teens in a group called Bones Brigade, which featured many of the top pros of the 1980s. In 1989, Mullen left the group to sign with World Industries, and he was able to witness Hawk’s ascent to superstardom from afar. He says he felt like an outsider at times, worried the other members of the team, Hawk included, would judge him for leaving. He kept in touch, but there was a distance.

“Then out of nowhere, I was on tour and I broke my ankle. And I was thinking that this happened for no reason, and I needed a friend,” Mullen recalls. “And so few could relate the way Tony related. I overcame all of that weirdness and reached out. ‘Hey man, I wanted to meet you because I don’t know if I’m going to keep going. I don’t know if this is a sign. I don’t know what’s up.’ He was like, ‘Sure, let’s meet up.’ So I met him on crutches in a restaurant, saying, ‘Tony, what do you think this means?’ And he said: ‘It means you got hurt. It doesn’t mean anything. Heal up, and get skating again. And by the way: do you want to be in my game?’ I was just blown away that he would even take the time to hang out with me, much less bring me into the game. That’s how it started.”

For those who were featured in those early THPS games, the impact was immediate and long-lasting. Muska says he remembers being recognized while out skating on the street, and fans would come up to Mullen at airports to talk about the game. Even now, if you check out skate videos on YouTube or Instagram, many of the top comments reference THPS. Lasek says that recognition continues to this day. “They don’t know me for being an X Games gold medalist, or for being a professional skateboarder for 30-plus years, or being a rally car driver,” he says of some fans. “They know me as a video game character. I’m still blown away by it.”

Looking back on it now, the skaters I spoke to say they remain proud of how those early THPS games represented skate culture for a mainstream audience, whether it was using the complex linguistics of trick names, re-creating the ingenuity necessary for street skating, or having a kick-ass soundtrack featuring the likes of Goldfinger and The Dead Kennedys. “It was a pure representation of what we were about,” says Mullen. “And it gave a real sense of what we do in the world and why it’s so addictive to be a skater once you start. Even if you’re not good, you can still become addicted to the mindset. It’s a way of looking at the world.” Muska adds, “There’s some embarrassing, funny, ridiculous stuff about the game, but I wouldn’t change any of it.”

Today, the production of a new video game can be a massive undertaking. In the lead-up to the remaster, the original cast of THPS was scanned so that their current likenesses could be featured in the game, and the process involved massive rigs with high-end DSLRs capturing them from all angles. But with those original games, things were much more low-tech. There were basic motion capture suits, and developers would film the skaters performing tricks from multiple angles before picking their brains about how things worked.

Mullen remembers there were times when he didn’t want to stop performing tricks for these sessions, and so the developers would stay at the studio alongside him for some very late nights. Occasionally, kegs were involved. What struck him most, though, was the care the developers took. “They dug into the nuance of everything I did,” he says. “The amount of attention to detail, and wanting to do it with fidelity and be true to skateboarding, and showing that respect, that’s the part that blew me away.”

For the most part, the upcoming remaster looks to remain true to the original games. It features updated graphics and some online features, but otherwise, the core of the experience remains intact. (That said, the franchise’s disappointing recent history, including THPS5, means fans should still be cautious.) One of the big changes, though, is the addition of a fresh crop of skaters: modern superstars like Tyshawn Jones, Nyjah Huston, Leo Baker, Leticia Bufoni, Aori Nishimura, Lizzie Armanto, and Shane O’Neill will all be featured alongside the original cast. Even Tony’s son Riley — who was seven when the original THPS came out and is now a seasoned pro — will be playable. Many of these skaters grew up playing the games.

Muska says he’s particularly proud at the range of people the games helped inspire, as evidenced by the new cast of skaters. “It’s really cool to see the diversity of people, to see more girls in it, to see just everybody,” he says. Mullen adds that there’s a mutual respect across generations that makes this new feature particularly special. “You can see it in their eyes,” he says. “I’m amazed by what they do, and they’re looking at me like, ‘Oh my god, you were in the game!’ Are you kidding? I can’t believe where you’ve taken skateboarding, and now we’re in the game together. This connection over 20 years, in such a seamless way, I hardly have words for how awesome it is.”

“I am more proud to be a skateboarder than anything else.”

The remastered collection of Tony Hawk’s Pro Skater 1 and 2 is coming to the Xbox One, PS4, and PC on September 4th, more than 20 years after the series first debuted. A lot has happened in that time. Skate videos on VHS tapes have given way to clips on Instagram, while video games have only become more ingrained in pop culture. On an individual level, Lasek expanded his horizons by becoming a professional rally car driver, while Muska continues to explore art and fashion through the lens of skate culture. Meanwhile, Mullen still goes out skating most nights, but he’s also a fellow at the MIT Media Lab and has done multiple TED talks. Despite all of these changes and the amount of time that has passed, Mullen believes that those early games still represent skateboarding culture in a way that has yet to be replicated.

“As time goes on, nothing makes me prouder than to know how I’ve devoted my talent and time and focus. I am more proud to be a skateboarder than anything else,” he says. “The Tony Hawk games captured the essence of skating in a way that is pure and that stands the test of time, and they’re putting it out there now when the world has a bigger window into skateboarding. There is no better representation of it.”